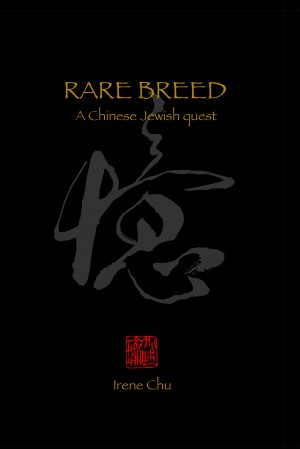 What would be the headlines on that missing page? Jews in India; Jews in Japan; Jews in China. And what we would read on that page – on those many pages – is an almost unbelievable history. In this book, Irene Chu has created an understanding of the hitherto barely known history of the Jewish communities in the East. She has done extensive research on the very early history of the Jewish settlement in Kaifeng and, with authorial licence, has woven into that history the story of her own family. After generations, her ancestors made the long trek from Kaifeng to Shanghai. And after yet more generations, she and members of her family emigrated to Toronto, Canada, where they live now.

In Japan, thousands of Jews lived not only free of hostility but actually welcomed – and this during the perilous years leading up to World War II, when no other country in the world would open its doors to them. And in China? That is the story of this book: the story of just one of the myriad Jewish families who lived for over a thousand years in security in China.

Born in Shanghai, grew up in Hong Kong, Irene came to Canada in 1963 and stayed. She has an Honours B.A. Degree in English Literature from University of Hong Kong and completed one and a half years of M.A. programme at McGill University. She obtained an A.R.C.T. Diploma in Pipe Organ Performance from the Royal Conservatory of Music in Toronto and a Media Development Certificate (Television production) from Ryerson Polytechnic Institute Toronto.

Irene is fluent in English and Chinese: Madarin (Putonghua), Cantonese and Shanghai, with elementary reading capability in French.

Irene was the executive producer/producer of a 20-episode television drama series “Once Upon A Time in Toronto” – a first of its kind of a Canadian production in association with a Chinese corporation, Western Movie Group of Xi’An.

In the past, Irene was a Member of the Appeals Division, Canada Immigration & Refugee Board, as well as a Canadian Citizenship Court Judge.

In the volunteer sector, Irene was the Co-Founder of Canadian Breast Cancer Foundation (in recent years it was merged with another Canadian cancer institute); the founding President of Hong Kong University Alumni Association (Ontario); and the founder of Ai Cheng Mandarin School which was amalgamated with Toronto District School Board's Heritage Language Programme.

She had sat on a number of Boards. Of note are: Toronto International Film Festival Board (tiff); Rogers OMNI Television Advisory Board where she was the Chair for three years; George Brown College Board of Governors; Toronto General Hospital Board of Trustees; Princess Margaret Hospital Foundation Board; Women’s College Hospital Board; BMO Bank of Montreal Asian Advisory Group. The Canadian Ethnic Media Association (CEMA) Board.

Currently she sits on the Board of Directors of Sweda Canada Inc. and is a Member of The Senate - Toronto & Western General Hospitals Foundation.

Irene’s Chinese Calligraphy adorns the covers of a number of published books namely:

“Being Chinese: Voices from the Diaspora” – University of Arizona Press – Dr. A. W. Djao

“Perpetually Cool: The Many Lives of Anna May Wong” – Dr. Anthony B. Chan

You have subscribed to alerts for Irene Chu.

You have been added to Irene Chu's favorite list.

You can also sign-up to receive email notifications whenever Irene Chu releases a new book.