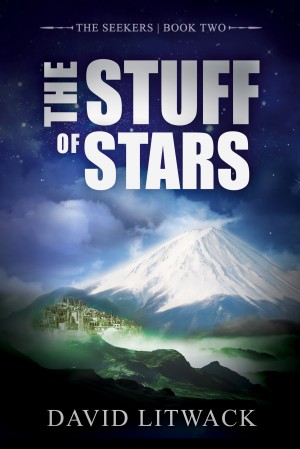 The Stuff of Stars

Desperate to keep their movement alive, Orah and Nathaniel cross the ocean to seek the living descendants of the keepmasters’ kin. Those they find on the distant shore are both more and less advanced than expected.

The seekers become caught between the two sides, and face the challenge of bringing them together to make a better world. The prize: a chance to bring home miracles and a more promising future for their people. The cost of failure: unimaginable.
~~~
Kirkus Reviews: "In this YA sci-fi sequel, Litwack pushes his characters into new physical, mental, and emotional realms as they encounter an unusual, tech-based society. A grand, revelatory saga that continues to unfold."
~~~
EVOLVED PUBLISHING PRESENTS the multiple award-winning second book in the extraordinary "The Seekers" series of dystopian sci-fi adventures. [DRM-Free]
~~~
BOOKS BY DAVID LITWACK:
"The Children of Darkness" (The Seekers - Book 1)
"The Stuff of Stars" (The Seekers - Book 2)
"The Light of Reason" (The Seekers - Book 3)
"The Daughter of the Sea and the Sky"
"Along the Watchtower"
"The Time That's Given"
~~~
MORE GREAT SCI-FI FROM EVOLVED PUBLISHING:
"The Jakkattu Vector" by P.K. Tyler
The "Red Death" Series by Jeff Altabef
"The Silver Sphere" by Michael Dadich
The "Panhelion Chronicles" Series by Marlin Desault

The urge to write first struck me when working on a newsletter at a youth encampment in the woods of northern Maine. It may have been the night when lightning flashed at sunset followed by northern lights rippling after dark. Or maybe it was the newsletter’s editor, a girl with eyes the color of the ocean. But I was inspired to write about the blurry line between reality and the fantastic.

Using two fingers and lots of white-out, I religiously typed five pages a day throughout college and well into my twenties. Then life intervened. I paused to raise two sons and pursue a career, in the process becoming a well-known entrepreneur in the software industry, founding several successful companies. When I found time again to daydream, the urge to write returned.

"There Comes a Prophet," published in July 2012, was the first novel in this new stage of life. My second, "Along the Watchtower," came out in June 2013.

My wife and I split our time between Cape Cod, Florida, and anywhere else that catches our fancy. I no longer limit myself to five pages a day and am thankful every keystroke for the invention of the word processor.

About the Series: The Seekers

Also in Series: The Seekers

You have subscribed to alerts for David Litwack.

You have been added to David Litwack's favorite list.

You can also sign-up to receive email notifications whenever David Litwack releases a new book.