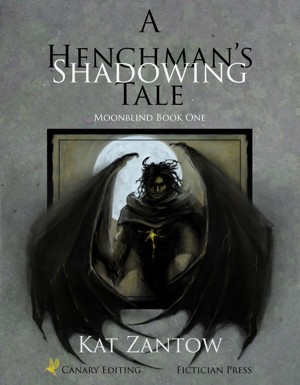 Kat Zantow is an author and illustrator specializing in sarcastic narrators and subverting fantasy cliches. A twentysomething alumna of Jon Stewart's alma mater, she is a coffee and Twitter addict, psychology enthusiast, and can't shake an art habit. She overdosed on bleak and postmodern literature in college and now writes everything from sword and sorcery to psychological thrillers to the occasional literati conspiracy. She is currently in love with the spatial efficiency of eBooks, and glad that we are living in the future.

This short novel – the first book of The Moonblind Journey – consists of a henchman of the great Magna, long live the Magna, telling his story to a storyteller. In this world, when a true hero comes to try to destroy the Magna, all henchmen are supposed to die – but this one doesn’t, and he’s telling the tale explaining why that is.

Obviously I can’t tell much of the plot without spoiling the story, but I do want to say that I found this story immensely entertaining and I plan to continue by tracking down the next book, named “Gloaming,” which word basically means that time of day right after sunset when the dusk is settling. I’m interested to see where the story continues. Fans of hero quest fantasy should find this story entertaining.

Shadowing: A Henchman’s Tale is in one word: fascinating! Kat Zantow does a wonderful job of combining humor, a unique view-point, and a true fantasy genre story all in one short book.

Hilarious lines like, “The Moon is a two faced whore.” pepper the novel adding tasteful and edgy humor without disrupting the narrative. The “flip side” view of traditional high fantasy is wonderfully presented and really makes the reader think, “That is so true!” As a lover of fantasy I found myself laughing at my ready acceptance of the sometimes generic and over played themes in traditional fantasy novels.

It is astounding and entertaining how Kat, while still holding true to the core elements of the genre was able to develop an ironic twist to it.

“The Henchman” our main character is a minion for the bad guys. He loves his role, probably because the world really sucks for everyone else. But when the typical gold armored and elf aided Hero turns his life upside down, The Henchman realizes that there is a lot more going on the world when you don’t have claws and fangs.

Prophecies, fights, and magical creatures (as well as more than a few sheep) keep everyone busier than they should be in this Arctic and totally wonky world. A fine balance between humor and a well-developed pot create a fast paced novel that is nearly impossible to put down.

The story itself is magnificent and engaging. I do wish for a little more description, but it would dilute the fast paced tempo of the “Henchman’s” tale. In fact, the lack of too much background prose will keep readers turning every page so they can understand every nuance of “Shadowing”.

It is common in eBook publications to find terrible grammar and spelling mistakes. Some eBooks I have read (here’s looking at you Charlaine Harris) look like an editor never so much as glanced at them. Fortunately, Shadowing defies this stigma in a wonderful way. The writing was concise and accessible, and had very few editorial flaws. In fact, many traditionally published books have more flaws. Kudos to Kat Zantow for creating a wonderful story that is as well-rounded in style and grammar as it is in entertaining narrative.

I strongly recommend “Shadowing” for any fan of light and engaging fantasy, clever references, and a good story. Can’t wait for the next in the series!

You have subscribed to alerts for Kat Zantow.

You have been added to Kat Zantow's favorite list.

You can also sign-up to receive email notifications whenever Kat Zantow releases a new book.