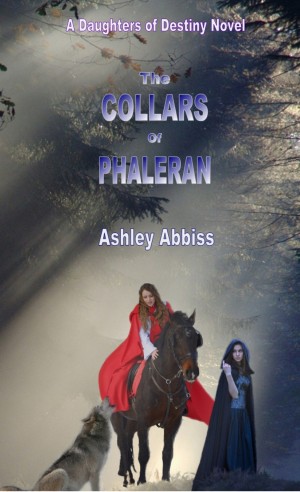 By Ashley Abbiss
Rated 4.50/5 based on 2 reviews
The Collars of Phaleran is an epic fantasy adventure in the best tradition of sword and ‎sorcery. Here you’ll find legendary lost magical jewels, animals that talk with humans, a quest ‎of the gods, a cartload of magic, and even a dragon, though he may not be quite what you ‎were expecting. Plus, of course, two young women struggling to be strong and courageous in ‎the face of impossible odds.‎ More
The life she knew ended in an orgy of violence on a lonely road. She’s so confused she’s ‎not even entirely sure who she is any more, and now, according to prophecy, she’s supposed ‎to save the world. The gods have got to be kidding! Don’t they?‎

Niari has lost absolutely everything. The life she knew, her beloved father, even her ‎liberty; they’re all gone. The only thing that keeps her sane as she tries to work through it all is ‎the friendship she strikes up with another young woman. But when Niari takes Carlitha’s ‎advice and tries to take control of the situation, it all blows up in her face in spectacular ‎fashion. Suddenly she’s supposed to save the world!‎

But how do you save the world when you don’t even know how to save yourself?‎

And the gods are not exactly making things easy: ‎

Carlitha threw her hands in the air. "I just love this," she said to no-one in particular. "We ‎have to go to the Isle. At least we know that much, I suppose. But when we get there we have to ‎find a tomb that no-one's ever been able to find. Then we're supposed to return the eye, but no-‎one knows what the eye is or where we're supposed to put it. And all this so we can find some ‎so-called treasures which are actually weapons, but nobody knows what sort of weapons they ‎are or what they do. And then after all that we have to find a bunch of strangers who are ‎supposed to help us, and then figure out what to do with these treasures so we can fight the ‎Cult with them. Have I left anything out?"‎
‎"No, I think you've just about covered it."‎
‎"Oh good. We wouldn't want it to get complicated, would we?"‎

Together, the two friends set out on a journey full of surprises. Not least of those is ‎Niari’s adoption by a runiac, the legendary ancestor of both the dog and wolf. She discovers ‎that she can speak to him, and he decides to accompany them on their impossible quest. ‎Having a runiac for a guard dog definitely gives a girl an edge, but will it be enough? They’re ‎about to find out, as the prophecy drives them inexorably toward a confrontation they can’t ‎avoid. There simply isn’t a way to escape destiny, and they are destiny’s daughters.‎

The Collars of Phaleran is an epic fantasy adventure in the best tradition of sword and ‎sorcery. Here you’ll find legendary lost magical jewels, animals that can communicate with ‎humans, a quest of the gods, a cartload of magic, and even a dragon, though he may not be ‎quite what you were expecting. Plus, of course, two young women doing their best to be ‎strong and courageous in the face of impossible odds. Why not join them?‎

Although it is the first book in a series, The Collars of Phaleran is a complete story in ‎itself and can be read as a standalone novel.‎

I live and write in beautiful New Zealand, where I live with one large dog, who looks nothing ‎like Friend from my Daughters of Destiny books. She is, however, almost as intelligent and definitely as ‎opinionated, and if she can’t quite speak in the way Friend does to Niari, that doesn’t really ‎hold her back much!‎

I write fantasy, mostly of the epic variety. Let me say right up front that if you’re looking for a quick read, you’re in the wrong place. But if you like a substantial, ‎satisfying story that you can really get your teeth into, stick with me. I may have something ‎you’ll enjoy. There’s no graphic sex in my books. If that’s what you want, you’ll have to look ‎elsewhere. There is violence, and there is swearing, though mostly of the ‘s/he swore’ variety, ‎nothing overly graphic or offensive. I also write about strong, independent female characters, ‎so if your taste runs to something more macho, or something more frilly and helpless, this may ‎not be the place for you. ‎

I’ve always loved wandering in different worlds, be they fantasy or science fiction, although ‎lately I tend to prefer fantasy. The only proviso is that they have to be believable worlds, ‎worlds that feel real, that have depth and scope – and they must, absolutely must be fun to ‎visit. I read for escape and entertainment, and I don’t really want to escape from this world ‎into one even grimmer. Trouble, tension, and danger I can deal with, what sort of story would ‎there be without them? Where would Pern be without Thread, Frodo without Sauron, Harry ‎Potter without Voldemort? But there has to be hope, and there has to be a light touch. Happy ‎ever after does have a lot going for it, even if initially it’s only a very small light at the end of ‎a long, dark tunnel. My personal favourites include Tolkien's Lord of the Rings trilogy, Anne ‎McCaffrey’s Pern series, and the fantasies of David Eddings, and lately, they’ve been joined ‎by J.K. Rowling’s Harry Potter and a few others. Of those, David Eddings was probably my ‎greatest inspiration.‎

I began to wonder if I could create my own world, one just as believable and multi-layered as ‎theirs. Could I create a world with its own history, geography, social structure, deities, and all ‎the rest? One that hung together? That a reader could believe in? It became a challenge, one I ‎really wanted to see if I could meet. So I dusted off my writing skills, learned a few more, ‎cranked up the imagination, and got busy. I’d always been good at creative writing, but ‎though I’d made a few attempts to write after I left school, none of them came to anything. ‎That was until I started writing fantasy. Suddenly, I knew I’d come home. ‎

I quickly discovered that I’m not the sort of writer who can plan a book (or a world!) before I ‎start. I just can’t do it. But I can create characters, and suddenly the characters took on a ‎reality of their own and took over the stories, often to the extent that they actually surprised ‎me. And the stories worked. Their world worked. Sometimes I had to go back and fix the ‎odd contradiction, but mostly it worked and was very natural and organic. Even though my ‎first attempts were pitiful, I knew I’d found where I belong. I persevered, I learned, I wrote. ‎I discovered that the characters are key for me. Once I get them right, they tell their own ‎story. I was away. There were dark days during which my stories became my refuge, my ‎characters my friends. And I kept writing. There were happy times when I didn’t need a ‎refuge, but my characters were still my friends, and they drew me inexorably back. I kept ‎writing. ‎

And now, I hope my characters may become your friends too, my worlds ones where you also ‎like to walk; perhaps even your refuge from dark days. Come join me in a world where magic ‎is real and the gods are near, where beasts talk and men and women achieve things they never ‎dreamed they could. But most of all, come and have fun! ‎
Happy reading.‎
Ash.‎

About the Series: Daughters of Destiny

Also in Series: Daughters of Destiny

A great book, a great read, a great escape.
Thank you Ashley

An epic quest, secrets, sorcery, a cult, religion and a runiac – yes, this has all the ingredients for Fantasy.

I enjoyed the read, but felt there was something missing. I wished for more direct action rather than ‘seeing’ what others were up to via the magical sight employed. I felt that we should have gone direct to the various points of action and been with those characters, seen it from their points of view instead having it told to us.

Also, when the scene changes there should be a break in the narrative to signify a change and this was not so. Large blocks of text made me somewhat square-eyed (although, admittedly, it could be my reading device).

However, despite these issues, it is an imaginative work and well worth the read.

You have subscribed to alerts for Ashley Abbiss.

You have been added to Ashley Abbiss's favorite list.

You can also sign-up to receive email notifications whenever Ashley Abbiss releases a new book.