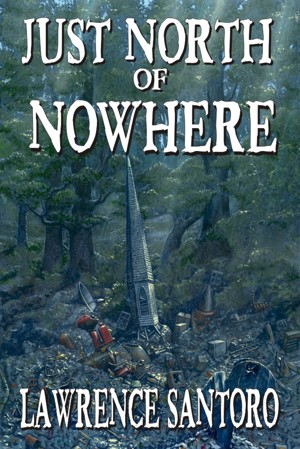 By Lawrence Santoro
"Just North of Nowhere" is an episodic contemporary fantasy novel that explores life in a small town in the "Driftless Zone" of the upper Midwest. More
“Some really small towns are Siren and Flasher. Crampback, Bumhip and Wetwhistle are others. Those places are to the west. Eastward, you’ve got Hog Wallow, Smokey's Hole, Blue Ball, Ong's Hat. A half-mile outside Bluffton there's Engine Warm. Now, Engine Warm's just a notion, no people at all. Compared to Engine Warm, Bluffton's not in the same game for small but it's not much.”

So begins "Just North of Nowhere," Lawrence Santoro’s lyrical exploration of the fantastical, magical, bright and dark town of Bluffton (Pop. 671) in the “Driftless Zone” of the upper Midwest. Bluffton teems with the strange, the wondrous, and the downright dangerous: a house that prowls and preys on the curious, a blind man who sees a century ago, a time shifting librarian who seeks to rebuild the world, just because she can! The 26 chapters of Just North of Nowhere, form what Ray Bradbury might have called an “accidental novel” and includes Santoro's Bram Stoker Nominated horror phantasmagoria, God Screamed and Screamed, Then I Ate Him.

“There is only one pleasure greater than hearing Lawrence Santoro read his tales of Bluffton aloud, and that is having them collected here in this volume, where you have the opportunity to read, re-read and savor every little description. The added revelation of this book, for those who have read or heard parts of the narrative separately, is how seamlessly and inevitably it all comes together. Santoro has assembled a remarkable cast of characters, but none so vivid, so funny, so dangerous and variable as Bluffton and surroundings itself. Bluffton is one of those tiny jewels...that reflects the world with excruciating clarity in every facet but casts its light in unfamiliar and unsettling ways. It is at once diabolical and redemptive, as all great works of dark tale-telling should be. And now, with gratitude to Larry, this jewel is ours. May we use it wisely.”
Richard Chwedyk, Nebula Award-winning author of "Bronte's Egg"
Available ebook formats: epub mobi pdf rtf lrf pdb txt html
First 10% Sample: epub mobi (Kindle) lrf more Online Reader
pdb
Price: $2.99 USD
Buy Add to Library Give as a Gift
How gifting works
Create Widget
Tags: coming of age native american contemporary fantasy ray bradbury golem circus winston churchill travel back in time lovecraft mythos strega
About Lawrence Santoro

As literary manager and dramaturge of Chicago's Organic Theater Company, Larry Santoro led the script development arm of one of the nation's leading producing theaters.
As story supervisor and associate producer of the syndicated television series, "Hyde & Seeke," Larry wrote, directed and supervised production during the comedy/mystery show’s first season.
In 2001, the Horror Writers Association nominated his novella “God Screamed and Screamed, Then I Ate Him” for a Bram Stoker Award in long fiction.
His production of Gene Wolfe's "The Tree Is My Hat" was presented at WORLD HORROR CON 2002. Introduced by Gahan Wilson, the audio drama featured a performance by best selling author Neil Gaiman. Larry’s script was nominated for a Stoker Award in 2003. A compact disc of the production is available.
His first novel, JUST NORTH OF NOWHERE, was published in 2007.
A collection of his short fiction, DRINK FOR THE THIRST TO COME, will be published by Silverthought Press in June, 2011.
A expanded version of JUST NORTH OF NOWHERE, will be published in several e-formats at about the same time.

Just North of Nowhere
This is a two-minute trailer for the contemporary fantasy novel JUST NORTH OF NOWHERE. It works to capture the lyrical quality of the book.

Reviews of Just North of Nowhere by Lawrence Santoro

You have subscribed to alerts for Lawrence Santoro.

You have been added to Lawrence Santoro's favorite list.

You can also sign-up to receive email notifications whenever Lawrence Santoro releases a new book.