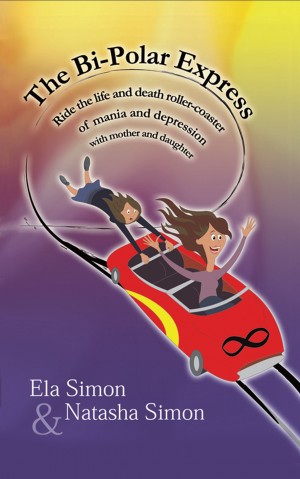 The Bi-Polar Express: Ride the Life and Death Roller-coaster of Mania and Depression with Mother and Daughter

All my life I knew I was different, I didn’t fit in. I always felt I could do everything – but things never worked out for me, I’d either get depressed for no reason or be hyper-active.

As you read my book, you will follow the ups and downs, the twists and turns, the high highs, the low lows, back and forth, faster and faster, of my Bi-Polar roller-coaster life. But always keep one thing in mind: you can put the book down and get off my roller-coaster ride…..I can’t.

This is a funny, sad story of a mother’s search from childhood, through the teenage years and beyond, for the correct diagnosis for her ‘different’ daughter, whilst desperately trying to battle with her daughter’s alienation, dramas and crises.

I am the daughter of Holocaust survivors. This changes the way I look at issues and deal with situations. I appreciate all that I have and for the sacrifices my parents made in Poland, Israel and Australia to give me a better and safer life.

I met my amazing partner, Peter, in the early days of my computer career. We have been together for over 40 years and initially worked for 25 years in the computer industry, designing and writing computer systems for various businesses. We later started a manufacturing business, using computer-controlled lasers to cut Australian animal shapes into wood to produce giftware such as coasters and tablemats. After that we started a business cooking and delivering European style sensational soups, delicious meals, gourmet vegie sides and scrumptious salads. But I can no longer look at another onion.

We lived in one of the beautiful sandy beach suburbs of Sydney, but we have since moved west to the misty Blue Mountains. I love my family, my dog and cats, cooking, history and world affairs. Peter and I are animal activists and members of the Animal Justice Party (AJP). We have 2 daughters, 1 dog & various cats.

The timeline for my book “It’s All Relatives” starts with my grandparents in Poland and concludes with the birth of my 2 daughters in Australia. See http://www.itsallrelatives.com.au/

The “The Bi-Polar Express” book was written with my daughter Natasha Simon and roughly chronicles the first 20 years of her life. See http://www.thebipolarexpress.com.au/

The “Panic Stations along The Bi-Polar Express” book was again written with my daughter Natasha Simon and roughly chronicles the next 10 years of her life. See http://www.thebipolarexpress.com.au/

The “My Story Isn’t Over” book was written solely by my daughter Natasha Simon and roughly chronicles the years since her last book. See http://www.thebipolarexpress.com.au/

Reviews of The Bi-Polar Express: Ride the Life and Death Roller-coaster of Mania and Depression with Mother and Daughter by Ela Simon & Natasha Simon

You have subscribed to Smashwords Alerts new release notifications for Ela Simon.

You have been added to Ela Simon's favorite list.

You can also sign-up to receive email notifications whenever Ela Simon releases a new book.