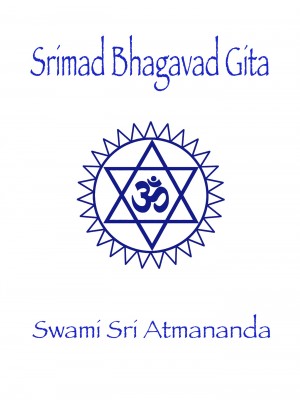 By Swami Sri Atmananda
"Gita, the celestial song, is the essence of eternal wisdom. It is neither a teaching nor a preaching. It is a revelation from the Supreme to the spark. It deals with different stages of the eternal journey that begins from turmoil and ends with the withering away of the ego." (From the Introduction.) This is the most recently revised English translation as revealed by Swami Sri Atmananda.

Swami Sri Atmananda is the founder of the Satyachetana International Spiritual Movement. Born in Orissa, India, his inner pull toward spirituality began during childhood and intensified as he progressed through higher education and university.  The Bhagavad Gita was his constant companion and guide, and through intense contemplation and practice of Gita’s principles he achieved profound spiritual attainment.  He also served at the feet of many enlightened masters, perhaps most notably His Holiness Maharishi Mahesh Yogi, and traveled the length and breadth of India on his spiritual quest.

That journey culminated in Pondicherry, where he surrendered to the Divine Mother.  She guided him to a cave in the holy mountain Arunachala where he attained the culmination of his sadhana, in 1993.  After remaining in the state of pure nirvikalpa samadhi for several days, he regained his awareness and returned to the world carrying the aham brahmosmi (“I am the Brahman”) unity consciousness that enables the yogi to consciously carry the guru shakti.

Sri Atmananda’s spiritual work as a master began in 1993. In response to his call for the manifestation of Truth on earth, several non-profit organizations were formed: Divine Mission, established in 1996, serves to guide awakened seekers to the state of highest spiritual realization, while Satyachetana International (SCI), founded in 2001, supports the overall expansion of the Movement and aims to manifest through life the highest truth that has been realized at the individual level. University of Spiritual Research (USR) was founded in 2004 to support and provide spiritual education.

Sri Atmananda’s primary residence is Satyachetana Ashram at the foot of Arunachala in Thiruvannamalai, Tamil Nadu, India, and he travels the globe to show mankind the yoga path of the Bhagavad Gita and to revive the pure wisdom that was lost over time.

You have subscribed to alerts for Swami Sri Atmananda.

You have been added to Swami Sri Atmananda's favorite list.

You can also sign-up to receive email notifications whenever Swami Sri Atmananda releases a new book.