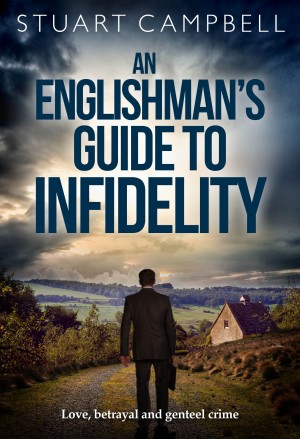 An Englishman's Guide to Infidelity

By Stuart Campbell
The Walsinghams dabble in petty crime as they try to enliven a failing marriage. But a figure from the past tips them into a double murder plot. Could this respectable Home Counties couple really be killers? More
Jack Walsingham's comfortable life is under pressure. With his bookshop going broke and past indiscretions catching up, Jack begins to dabble in embezzlement. Meanwhile, his wife Thea, frustrated by a dead end in her career, is experimenting with some genteel theft of her own. But soon the couple are out of their depth, blackmailed by a figure from the past and implicated in two grisly killings. Their salvation comes in the form of Detective Sergeant Fiona Salmon, a recently widowed book-loving gym addict on the edge of an emotional melt-down. A bizarre triangle develops in which Thea, Jack, and Fiona each find their own version of redemption in the face of betrayal and infidelity. An Englishman's Guide to Infidelity is at once a psychological thriller, a crime mystery, a dark comedy, and a love story.

Stuart Campbell began writing fiction in the eighties, but was diverted by the need to earn a living; those early literary efforts lie - thankfully - deep in landfill somewhere near London. After exiting the world of academia he restarted his affair with writing fiction in 2011.
His first novel 'The Play's the Thing' is a satire set in Bandicoot Ridge, a mountain village in Australia which finds itself at the centre of a bitter political battle. It has been revised and republished in 2016 as 'The Making of Martin F. Mooney'.
He switches the setting to England for his second novel 'An Englishman's Guide to Infidelity', a black comedy about middle-class morality gone wrong.
His third novel 'Cairo Mon Amour', a story of espionage, betrayal and love during the Yom Kippur War in 1973, was published by Austin Macauley Publishers in 2017 under a traditonal (non-contributory) contract.
Meanwhile, Stuart has produced a novella 'Ash on the Tongue', which, along with 'Cairo Mon Amour' and 'Bury me in Valletta' forms the Pierre Farag Espionage series.
Stuart was formerly a Professor of Linguistics and a Pro Vice Chancellor at Western Sydney University. He has published numerous books, chapters and research articles in the areas of translation studies and Arabic linguistics. Stuart holds the title of Emeritus Professor.
Born in London, Stuart has lived in Sydney since the seventies.

You have subscribed to alerts for Stuart Campbell.

You have been added to Stuart Campbell's favorite list.

You can also sign-up to receive email notifications whenever Stuart Campbell releases a new book.