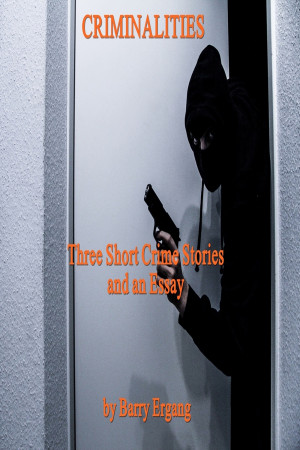 The first story is”Jewel of Denial,” a gem originally published in the June 2005 issue of Mysterical-E.
Lainie Truscott is dismayed when guests at her bed and breakfast are robbed of cash and jewelry during the night. Lainie follows a hunch and takes a short trip to see if she's right. When she arrives at her destination, one surprising twist after another will leave you grinning, nodding your head, and thinking, “Well done, Mr. Ergang.”

Next up is “Vigilante,” which received a Derringer Award in 2007 for Best Story of the Year. Weissman is alone in a dark alley with a militant, tattooed skinhead. Their vast difference of opinion about the Holocaust is settled in the only appropriate manner.

The third story, “Brianna’s Way,” was an Editor’s Choice when it appeared in Flash Bang Mysteries Magazine. When his ex-wife's lawyer wants to talk to him, Rutledge agrees to the meeting out of curiosity. Brianna is accused of killing her second husband, the man she dumped him for. What does the woman who ruined his life want from him?

In the essay “Impossible Pleasures,” Mr. Ergang tells how in his youth, he became an “unregenerate, unapologetic fan of the mystery genre,” and discusses classic writers and stories. He was drawn in particular to the “locked door” or impossible crime” tales. These are the stories in which a crime is committed in a space such as a locked room with no way for the criminal to get in or out without being seen. If you're a fan of this type of story, you'll learn which authors, past and present, to look for.

For an excellent example of a locked room mystery, I recommend reading “The Play of Light and Shadow,” one of many published stories by Barry Ergang. You'll find it at:
Smashwords: http://tinyurl.com/cdrtjro

Criminalities: Three Short Crime Stories and an Essay begins with “Jewel of Denial.” The owners of the Forest Grove Inn, Lainie Truscott and Frank Truscott, were thrilled when the wealthy widow, Ramona Braithwaite came to stay with them. Mrs. Braithwaite was also quite pleased with her accommodations. That is until the Tuesday after Memorial Day when her diamond-and-ruby bracelet was discovered to be missing. She wasn’t the only one to suffer a loss of valuable belongings.

The local police were called in and could only conclude a thief came in the night. They had no idea who might have been the culprit and had no clues to pursue. Lainie Truscott has a suspect in mind. If she is right, fixing the problem could be a bit tricky in this tale originally published in the June 2005 issue of Mysterical-E.

The 2007 Derringer award winning best flash story, “The Vigilante,” published in the summer. 2006 issue comes next. Weissman isn’t impressed with the young skinhead’s theatrics. It is time to permanently educate the young punk.

Last fall, “Brianna’s Way” was published in the first issue of Flash Bang Mysteries and was one of two stories selected as the “Editor’s Choice.” The tale appears again here in this read. Mr. Rutledge’s ex-wife, Brianna, stands accused of murdering her second husband, Caleb Gillis. For her first husband, now a former detective, neither Brianna nor her lawyer, Hampton Conrad, are people he wants to deal with at all. But, as a matter of curiosity, he agrees to meet with Mr. Conrad just to see what the woman who destroyed his life might want now.

The author’s essay “Impossible Pleasures” brings the short read to a close. First published in Mysterical-E back in 2004 the revised and expanded version that appears here also ran in the May 4, 2013 issue of Kings River Life Magazine. The essay recounts how the author became a fan of the mystery genre especially in regards to “impossible crime” stories.

Those reading influences can be seen in the three short tales in this free book by way of Smashwords. Not only does the book give readers an idea regarding the book the author’s background, the read provides a small sample of the author’s award winning and otherwise work. Plenty of mystery and character development is at work in these tales. Criminalities: Three Short Crime Stories and an Essay is a highly entertaining fast read.


Free read was picked up by me to read and review.