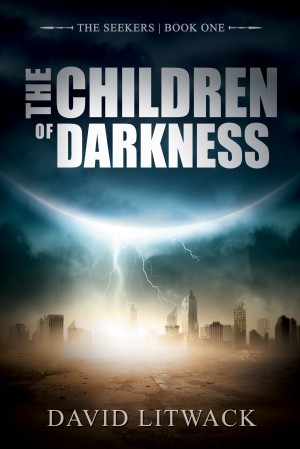 The Children of Darkness

Childhood friends, Orah, Nathaniel, and Thomas have always lived in the tiny village of Little Pond, longing for more from life but unwilling to challenge the rigid status quo. When they're cast into the prisons of Temple City, they discover a terrible secret that launches the three on a journey to find the forbidden keep, placing their lives in jeopardy, for a truth from the past awaits that threatens the foundation of the Temple. If they reveal that truth, they might once again release the potential of their people.

Yet they would also incur the Temple’s wrath, as it is written: “If there comes among you a prophet saying, ‘Let us return to the darkness,’ you shall stone him, because he has sought to thrust you away from the Light.”
~~~
"The plot unfolds easily, swiftly, and never lets the readers' attention wane... After reading this one, it will be a real hardship to have to wait to see what happens next." ~ Feathered Quill Book Reviews (Awarded "The Children of Darkness" the Gold Medal in Science Fiction & Fantasy)

The urge to write first struck me when working on a newsletter at a youth encampment in the woods of northern Maine. It may have been the night when lightning flashed at sunset followed by northern lights rippling after dark. Or maybe it was the newsletter’s editor, a girl with eyes the color of the ocean. But I was inspired to write about the blurry line between reality and the fantastic.

Using two fingers and lots of white-out, I religiously typed five pages a day throughout college and well into my twenties. Then life intervened. I paused to raise two sons and pursue a career, in the process becoming a well-known entrepreneur in the software industry, founding several successful companies. When I found time again to daydream, the urge to write returned.

"There Comes a Prophet," published in July 2012, was the first novel in this new stage of life. My second, "Along the Watchtower," came out in June 2013.

My wife and I split our time between Cape Cod, Florida, and anywhere else that catches our fancy. I no longer limit myself to five pages a day and am thankful every keystroke for the invention of the word processor.

About the Series: The Seekers

Also in Series: The Seekers

Reviews of The Children of Darkness by David Litwack

You have subscribed to alerts for David Litwack.

You have been added to David Litwack's favorite list.

You can also sign-up to receive email notifications whenever David Litwack releases a new book.