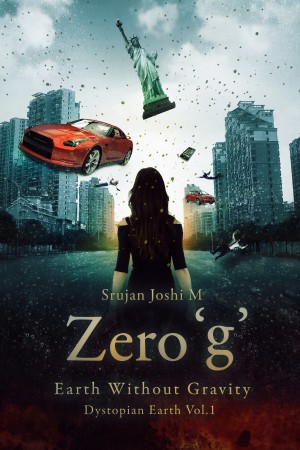 By Srujan Joshi
Rated 2.00/5 based on 1 reviews
What would happen if the world we know was literally turned upside down—if the Earth lost gravity, the very force that holds all of nature and society together?Zero g takes readers to the year 2074, where environmental destruction has progressed to an unimaginable point, and the unthinkable has actually become a reality.A simple NASA janitor and two teenage science prodigies are our only hope. More
It is the year 2074. Amazing advances in technology have allowed the human race to boast achievements far beyond any previously imagined—but all while ignoring the distress of their overtaxed planet.

Finally, one fateful day, the Earth can’t take any more. One hemisphere suffers from continually melting ice, while the other is crushed by a heavy molten iron volcano scientists believe is erupting from the globe’s core. The natural balance we take for granted is thrown off, and the Earth loses gravity.

Unthinkable horrors follow. Death, destruction, and chaos abound. Cars are floating, airplanes are crashing, and the atmosphere itself is vaporizing into nothing.

Carley, a single mom working at NASA as a janitor, stumbles upon Henry and Linus, two brilliant teenage science prodigies. Together, they hatch a plan to save the planet and stop the destruction.

Will the unlikely trio bring gravity back to Earth, or will all be lost forever?

Srujan Joshi is a researcher and technology developer who is passionate about finding the hidden energy of nature. He loves to ask what-if questions and create stories from the answers. Joshi is a constant thinker, a futuristic technology geek, and a space science enthusiast.

Two stars because this is not my expectation of a sci fi story. This story has all the masala but none of the main ingredients.

I'm reviewing after only a few chapters, but you lost me at the earth losing gravity for no reason given, not even a mad fantasy reason. Gravity is to be replaced by Particle B, to be hauled from outer space. That's too banal and ... Hollywoodish.

That said, there is nothing objectionable about the story or the treatment. The writing is fairly taut, there are neither typos nor bad grammar nor bad editing. The characters are reasonably developed and decent humans. I just expected it to be more hard sci fi, which is my fault because the intro on this page is clear enough that the Earth is just sick and tired of humans. So, if that's your scene, have at it.

You have subscribed to alerts for Srujan Joshi.

You have been added to Srujan Joshi's favorite list.

You can also sign-up to receive email notifications whenever Srujan Joshi releases a new book.