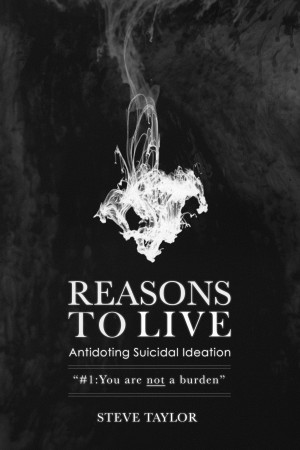 By Steve Taylor
For those buffeted by the dark thoughts of suicidal ideation, this book offers antidotes to such darkness, planting the seeds of hope, encouragement, and emotional resilience in the process. Compiled from the case histories of 1000's of client presentations worldwide, Reasons to Live represents the voices of those who made it from darkness into light, and speaks to those who desire to do likewise. More
What readers are saying about "Reasons To Live: Antidoting Suicidal Ideation":

“The books concept is brilliant”

“This is a potentially life-saving book”

“This chapter- book series needs as wide an audience as possible”

"I found your writing to be clear, precise and very human. It touched a lot of nerves for me having lost my aunt at a young age. Keep up the fantastic work".

For those buffeted by the dark thoughts of suicidal ideation, this book offers antidotes to such darkness, planting the seeds of hope, encouragement, and emotional resilience in the process.

Compiled from the case histories of 1000's of client presentations worldwide, Reasons to Live represents the voices of those who made it through darkness into light, and speaks to those desire to do likewise.

Steve Taylor, a New Zealand-based Family & Relationship Therapist and author, says that Reasons To Live is designed to privately meet a person in their pain, at whatever level, and to give them a narrative companion to journey with, towards an embedded ultimate hope in life.

As the title suggests, Reasons To Live offers an antidote to potentially destructive forward thinking or action, recognised commonly as Suicidal Ideation.

The serialised chapter book format and text will be most useful to individuals struggling to make sense of their current life circumstances, and to families and friends who wish to offer a supportive and encouraging resource to a loved one whose circumstances are at risk of overwhelming them.

This is Chapter 1 of the "Reasons" series, and further chapters will be released over time.

Steve is a New Zealand-based Relationship and Family Therapist and the Director of Relationship Matters Ltd, a private Counselling practice which has attracted an international client base since 2002.

Educated at Dilworth School in Auckland, New Zealand, Steve previously worked as a Marketing and Management Consultant, winning a total of nine National Marketing Awards between 1992 - 1996 and holding a CEO position of a National Trade Organisation at 27 years of age.

Steve then re-trained in the Social Sciences field, securing two applied Bachelor’s degrees (Counselling and Addiction) and a Post Graduate qualification in the process.

Steve is married with two children.

Steve's interests and passions include political discourse, philosophy, media commentary, advocacy, and an absolute and fundamental rejection of tokenism in the form of political correctness.

As a public speaker, lecturer, and trainer with over 20 years experience, Steve has developed and delivered a number of custom made, practical Training workshops and has lectured both in New Zealand and overseas for a wide range of groups and organisations including Parents Inc, the New Zealand Families Commission, the New Zealand Association of Counsellors, the Parachute Music Festival, the Anglican Pastoral Retreat Centre, the Alcohol Advisory Council (ALAC), the New Zealand Family Safety Teams, Community Alcohol and Drug Services (CADS), the Manukau Institute of Technology, the Problem Gambling Foundation, and the Salvation Army Bridge Programme (Tasmania).

Reasons To Live: Antidoting Suicidal Ideation is Steve's first book, and is being released as a serialised chapter book.

You have subscribed to alerts for Steve Taylor.

You have been added to Steve Taylor's favorite list.

You can also sign-up to receive email notifications whenever Steve Taylor releases a new book.