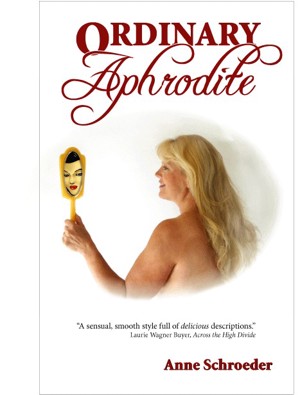 Essays are insightful and evocative with a sense of sympathetic humor, including: "Victoria Ain't Got The Secret", "Not My Mama's Bloomers", Writing Through The Rage", "Travels With The Grownchild", "Releasing Aphrodite", and "Chocolate Necessities."

Anne Schroeder shares her growth from teenage wife and mother whose humorous and sometimes desperate mid-course adjustments have managed to nurture a 40+ year marriage and three relatively well-adjusted children. That she has survived to tell the tale can be appreciated by boomer women who want to revisit their own journey, and share it with daughters and nieces who are making their own mid-course adjustments.

"Reading Anne Schroeder is like sitting across the table from her. Her prose is colorful and conversational, her memories are honest and hilarious. She looks back on her life with the self-acceptance and clarity of a wise woman, and, gratefully, has chosen to share her memories with us."
Kathleen Deragon, Editor, Women's Press, San Luis Obispo, California.
Available ebook formats: epub mobi pdf rtf lrf pdb txt html
First 20% Sample: epub mobi (Kindle) lrf more Online Reader
pdb
Price: $6.99 USD
Buy Add to Library Give as a Gift
How gifting works
Create Widget
Tags: boomer culture humor and romance relationships and spirituality womens journey relationships and family
About Anne Schroeder

A fifth-generation Californian, Anne Schroeder’s love of writing was fueled by stories of her Norwegian great-grandfather and his neighbors working together to blast a grade out of solid rock. She evokes the drama of growing up in a close-knit Southern California farm community in her first memoir, Branches on the Conejo: Leaving the Soil after Five Generations.

A willingness to say "yes" to life allows Schroeder to use her experiences and her misadventures in life, love and motherhood resonate with the common themes shared amongst women throughout their lives.

In her memoir, ORDINARY APHRODITE, she writes about her experience as a boomer baby who came of age on the crest of the ’60s Social Revolution. Newly released CHOLAMA MOON is the first in a series of historical westerns that depict the Spanish, Mexican and American eras of California's Central Coast and their affect on the Salinan (Mission) Indians who lived there.

Schroeder has had short stories and essays published in national print magazines and the LAURA Journal. She is President of Women Writing the West

She considers exercise a necessary evil, but she enjoys walking her chocolate Lab puppy, Maggie and sitting in the sauna at her gym after an easy workout. Her family is not always thrilled with the fact that their life is an open book, but she tells them that memoir writers are like old show horses; always happiest when they’re in the ring.

You have subscribed to Smashwords Alerts new release notifications for Anne Schroeder.

You have been added to Anne Schroeder's favorite list.

You can also sign-up to receive email notifications whenever Anne Schroeder releases a new book.