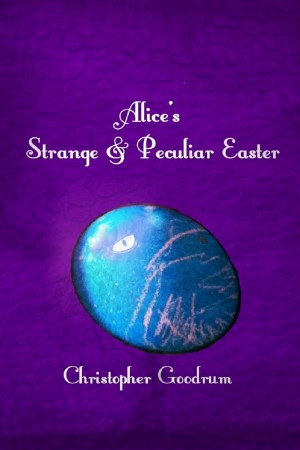 By Christopher Goodrum
Alice McBride never knew Easter could get so…complicated. But then, a talking rabbit with a bowler hat named Chester White shows up looking for an egg: an egg containing a dangerous creature known as the Jibbernosh. The good news: it is harmless while still an egg. The bad news: it is in her house and ready to hatch. More
Of all the eggs in all the world, Chester White had to lose the egg that could destroy Easter forever. Because inside the egg was a dangerous creature: the Jibbernosh. But it wasn’t his fault. Truly. But if he didn’t find it and return it to his land, it will be his fault. He finds Alice, a young girl who may be able to help him when he learns the egg is in her house. But Alice believes it’s just her overactive imagination. Flights of fancy…until Chester keeps showing up at the most inopportune time. With a family holiday dinner underway and the danger of the egg hatching, Alice reluctantly agrees to help Chester get the egg out of the house before it does.

Christopher Goodrum writes on the go. That is how he would describe how he prefers to write. He still prefers the old way of writing: putting pen to paper, even in this age of laptops and tablets,

Starting with comedic skits for talent shows at a young age, Goodrum quickly found his knack for humor and the art of screwball comedies. His later years transformed his work from skits to dramatic plays, having scripted, performed, and directed an one-act play for the senior class of his high school as well as scripted original dialogue for his high school's Broadway Revue show. All the while, he begun his adventures in writing novels and teleplays. After a few years, he shifted his focus on honing his craft in writing novels: particularly in the genres of science fiction and fantasy.

Goodrum is an entertainer at heart. A self-proclaimed jack-of-all-trades in this field. He acted and directed; sung and danced; composed, recorded, and performed musical scores; played the piano; briefly tried stand-up; and learned the art of improvisation. He performed in numerous plays and musicals, both in high school and for San Joaquin County in California, performing in front of the state's capital; and performed in two theme parks, including Paramount's Great America (now, California's Great America) and the Disneyland Resort.

Through it all, writing was the one thing that was always present.

You have subscribed to alerts for Christopher Goodrum.

You have been added to Christopher Goodrum's favorite list.

You can also sign-up to receive email notifications whenever Christopher Goodrum releases a new book.