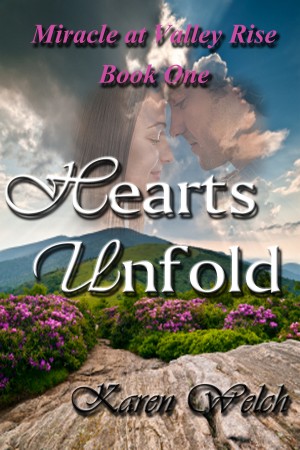 By Karen Welch
Rated 4.00/5 based on 1 reviews
A secret Christmas homecoming, a blinding snowstorm, and in the course of one night two shattered lives will be changed forever. More
Nineteen-year-old Emily Haynes had lost almost everything she loved. Relying on what seems to be guidance from her invalid father, she returns to her past in hopes of finding some sign toward the future. What begins as a joyous homecoming quickly turns into a nightmare when a badly injured stranger stumbles on the scene, his brief presence threatening to alter everything she believes about herself and the plan for her life. A less determined girl might have been shaken by such an experience, but not Emily. She is certain she’s made the right choice, so certain that in the following three years, she almost convinces herself.
Super-star violinist Stani Moss appeared to have everything, fame, fortune and a career guaranteed to bring more of the same, until one hasty decision placed it all in jeopardy. Terrified and confused, he struggles not only to recover his former skill, but to find answers to the questions which haunt him. Throughout his slow journey back, one image lingers in his buried memories of that fateful night—the vision of a girl he’s never met. The journey will eventually lead him to Emily, and beyond that day, everything about his life will be transformed.
Set in the years around 1970, Hearts Unfold begins the saga of two people whose paths should never have crossed, who defy the odds to create a life they can share. The first of four volumes in the Miracle at Valley Rise Series, this novel could stand alone as a triumphant tale of romance, but there’s much more to the story, as Emily and Stani reveal their pasts and strive to bridge the distance between their worlds. Follow their progress, be entertained by their adventures, and perhaps be inspired by their unwavering belief in the transforming power of love.
Download: epub mobi (Kindle) pdf more Online Reader
lrf pdb txt
Price: Free! USD
Add to Library
Create Widget
Tags: romance 1970s saga romance series
About Karen Welch

Karen Welch was born in Richmond, Virginia and grew up in nearby Amelia County, where her family had originally settled in the 1720’s. After a twenty year sojourn in North Florida, she now resides in Southeast Kansas with husband John, a cocker spaniel named Raleigh and an eccentric calico cat who on occasion answers to Patches. Her long delayed writing career began in 2012 with the publication of her first novel, Hearts Unfold. This inspirational romance quickly grew into the Miracle at Valley Rise series with the release of Entreat Me Not, Heart of My Own Heart and Offered for Love in the following year. Karen is also the author of the holiday novella, Christmas at Valley Rise, and Shannon’s Daughter, a romance set in the mid-twentieth century revolving around one of the characters in the series. Her most recent release, Katie Lost and Found, begins a new series titled Welcome to Walnut Lodge.
Contact Karen at welchkaren@yahoo.com, find her on Facebook at https://www.facebook.com/pages/Karen-Welch/535693969790765?ref=hl, follow her blog Lost in the Plains at http://valleyrise.blogspot.com/ . and follow her on Twitter @welchkaren1.

You have subscribed to alerts for Karen Welch.

You have been added to Karen Welch's favorite list.

You can also sign-up to receive email notifications whenever Karen Welch releases a new book.