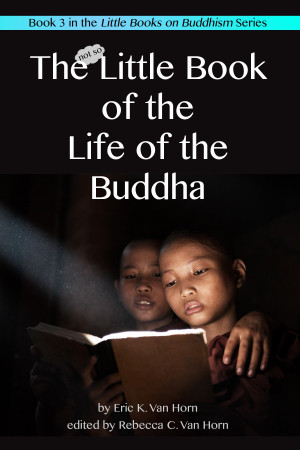 The Little Book of the Life of the Buddha

By Eric Van Horn
This biography goes back to the original, canonical sources in order to construct a reasonable, factual account of the Buddha’s life. But this is not simply a scholastic biography. It describes the Buddha’s life as an archetype for our own, and to answer the most fundamental question of how we use the Buddha’s teachings to become happier more useful people. More
In the centuries that followed the Buddha’s death there were many fanciful and mythologized accounts of his life. Unfortunately these stories gained traction, and even today movies and television programs are often based on these accounts. The Little Book of the Life of the Buddha goes back to the original sources in order to reconstruct his life from the oldest material. This helps answer important questions about the nature of the Buddha and his quest for Awakening.

Despite some assertions that there is little biographical information about the life of the Buddha, quite the opposite is true. In fact, a major hurdle for any biographer of the Buddha is the enormous amount of information that is scattered throughout the thousands of pages of canonical literature. This information is enhanced by some extraordinary research and archeology from the past 200 years.

But this is not simply a scholastic biography. The important question is, “What can I learn from the life of the Buddha?” How does it help me become a better person, and a better meditator? How can I learn from the many inspirational people in the Buddha’s life? The Little Book of the Life of the Buddha looks at the often subtle lessons in his teaching. This brings us closer to understanding the man and his Dharma, and how it helps us become happier, wiser, more useful people.
Download: epub
Price: Free! USD
Add to Library
Create Widget
Tags: buddha buddhadharma buddhas life buddhas stories
About Eric Van Horn

Eric Van Horn was born and raised in Lower Pottsgrove, Pennsylvania. He graduated Pottsgrove High School in 1970 and went to college at Goddard College in Plainfield, Vermont. He graduated from Goddard in 1973 with a B.A. in Liberal Arts. His senior thesis was about his experience as a community organizer for a drug abuse prevention program in Pottstown, PA.

After graduation he worked in a number of social service jobs, but eventually discovered a love of computer programming. He spent the next 33 years working as a software engineer. In his last job he spent 18 years working in the field of medical informatics at the PKC Corporation in Burlington, Vermont. He retired from PKC in 2011 to devote his life to his Buddhist practice.

His interest in Buddhism began in 1991 when he attended a "spiritual support group" at the Burlington Unitarian Church. Over the next 20+ years he attended many retreats at the Insight Meditation Center in Barre, MA, the Barre Center for Buddhist Studies in Barre, MA, the Zen Mountain Monastery in Mt. Temper, NY, the Omega Institute in Rhinebeck, NY, the Bhavana Society and Monastery in High View, WV, the Embracing Simplicity Hermitage in Asheville, NC, Kharme Choling in Barnet, VT, and Maple Forest Monastery in Woodstock, VT. He went to India on Buddhist Pilgrimage in 2004.

Eric has written several papers on Buddhism, including "Jhāna in the Majjhima Nikaya" and "Reverse Engineering the Buddha's Enlightenment." These can be found at http://nobleeightfoldblog.com/resources/. in 2015 he published the "Travel Guide to the Buddha's Path," a practice guide that provides an outline of the whole of the Buddha's path as described in the Pāli canon.

He moved from Vermont to New Mexico in 2014 because it was "sunnier, warmer, and cheaper." He also found a living situation that is quieter and more conducive to meditation. He has two adult children, Seth and Rebecca, a daughter-in-law Britomarte, and a grandson James.

About the Series: The Little Books on Buddhism

This eight-book series takes you through the entire arc of Buddhist practice, from first sitting to final awakening, what is also called “enlightenment.” They provide instruction on the first stage of meditation, on ethical conduct, the life and times of the Buddha himself, as well as the foundational, wisdom teachings of the Buddha.

The topics then move on to more advanced topics like mindfulness, concentration, and daily living. And finally there are the transcendent issues of rebirth, the Buddhist cosmology, and awakening itself.

What we discover is that the Buddha’s message is timeless. It does not need to be modernized, merged with the field of psychology, or Westernized. One of the great lessons of the Buddha’s discourses is that in 2500 years, the human mind has not changed. And the cure for our problems of living has not changed, either.

Also in Series: The Little Books on Buddhism

You have subscribed to alerts for Eric Van Horn.

You have been added to Eric Van Horn's favorite list.

You can also sign-up to receive email notifications whenever Eric Van Horn releases a new book.