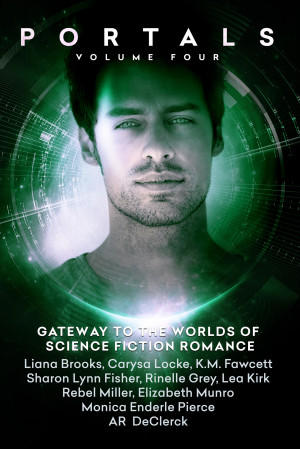 Volume Four. Your gateway to the worlds of science fiction romance. More
Welcome! You have arrived at a portal to the galaxy.

Enter, and you'll be introduced by award-winning authors to worlds beyond imagining, with heroes & heroines who dare to take it to the edge and beyond. Count on these adventurers to take their best shot … at their enemies and at romance!

Liana Brooks was born in San Diego, California. Years later she was disappointed to learn that The Shire was not some place she could move to, nor was Rider of Rohan an acceptable career choice. Studying marine biology so she could play with sharks seemed to be the only alternative. After college Liana settled down to work as a full-time author and mother because logical career progression is something that happens to other people. When she grows up, Liana wants to be an Evil Overlord and take over the world.

In the meantime, she writes sci-fi and SFR in between trips to the beach. She can be found wearing colorful socks on the Emerald Coast, or online at www.lianabrooks.com.

About the Series: Portals

Your gateway to the worlds of Science Fiction Romance. Forty first chapters by forty authors in four fantastic volumes

You have subscribed to alerts for Liana Brooks.

You have been added to Liana Brooks's favorite list.

You can also sign-up to receive email notifications whenever Liana Brooks releases a new book.