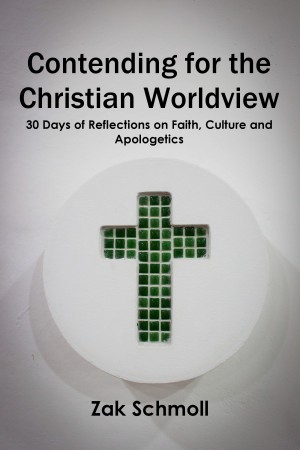 Contending for the Christian Worldview: 30 Days of Reflections on Faith, Culture and Apologetics

By Zak Schmoll
Take a 30 day journey through the Bible and reflect on what it means to be a Christian in modern society. This devotional will encourage you to consider the reason for the hope that we have in Jesus Christ.

Zak Schmoll is the founder of Entering the Public Square, a blog founded on the sincere belief that every Christian should understand the importance of discussing Christianity in the marketplace of ideas. In a culture that is growing increasingly resistant to the truth of the Gospel, the need has never been greater.

He completed his undergraduate degree in Business Administration and Statistics from the University of Vermont, graduating in 2013. While working full-time as a surplus lines underwriter, he decided to return to school and pursue a Master of Arts in Apologetics from Houston Baptist University. He graduated in the spring of 2016.

He will be enrolling in the PhD in Humanities program at Faulkner University in the fall of 2016.

Schmoll spent many years as a journalist. While writing for Bleacher Report, his articles were read over one million times. He then decided to turn his attention to things of more eternal significance. Beginning in the summer of 2012, he began a journey through the Bible, one chapter at a time. Each day for approximately three years, he shared his journey through Scripture with anyone who would listen. In the fall of 2015, that journey came to an end, but all the posts are still available online at https://achapterperday.wordpress.com/.

You have subscribed to alerts for Zak Schmoll.

You have been added to Zak Schmoll's favorite list.

You can also sign-up to receive email notifications whenever Zak Schmoll releases a new book.