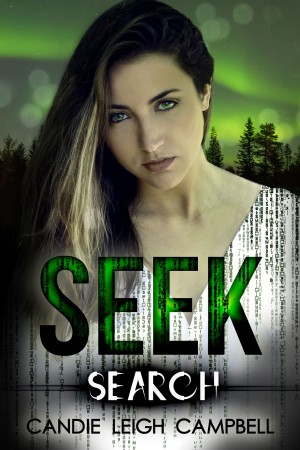 By Candie Leigh Campbell
As a trained SEEK hunter, seventeen-year-old Keira thinks she knows what’s going on in her world; the shadows called Khayal are real and they bite. But the truth is more complicated, especially when her next target turns out to be Jonathan Steed, good looking, green-eyed, fast-talking—and very HUMAN. Now no one is safe, especially not her heart. More
"The 5th Wave" meets "The Host" in an epic new saga, SEEK.

“An intriguing read that any pre-teen or teen will enjoy!”—LitPick

Out of seven billion people, there’s only one thing we all have in common.
We search for what eludes us.
We evade what causes us sorrow.
We extract what doesn’t suit our needs.
And we kill to get what we want.
WE SEEK.
In the time it takes you to read this, two lives will be revoked and one spared. Some call it divine intervention, others say natural selection decides, but no one really knows for sure.
EXCEPT ME.
My name is Keira, and this is how I saved you.

Keira Donavan joins a secret government agency called SEEK to get her sister, Lindy, an illegal operation (a genetically created spinal cord transplant). The surgery promises to repair Lindy’s legs after a car accident, which Keira feels responsible for, leaves her paralyzed.

At SEEK, Keira is a trained huntress who tracks and kills parasitic shadows in the Daniel Boone National Forest. She's told the shadows—the "Khayal"—are evil parasites which prey on humans. But things get weird after she finds herself injured and alone in the woods. Once rescued, everything changes including her eye-color and her job. SEEK gives her a human target—a handsome nineteen-year-old millionaire—Jonathan Steed. Now she has two choices if she's going to succeed in getting Lindy that operation, seduce Jonathan and convince him to join SEEK...or kill him.

But nothing goes according to plan when she finds herself staring into eyes the same radioactive green as hers. Jonathan swears SEEK's been lying to her, but it isn’t until Keira comes face-to-face with a true Khayal that her world crashes down—one lie at a time—until she's forced to see the truth. Khayal are good and SEEK wants her dead. But running isn’t that simple. SEEK has her sister and her family.

Again Keira must choose, save her sister and her family or save the Khayal. And falling in love with Jonathan isn't helping.

Born in Rockledge Florida, Candie was influenced from birth by her father, the rocket scientist. Growing up on Merritt Island, her world was full of unimaginable intrigue. As a small child she roamed the halls of NASA, mesmerized by rooms of giant computers and rockets that stretched to the sky. It was the height of the space-race and her family regularly attended rocket launches--watching them blast-off for the moon. There, Candie’s love for all things science and science-fiction exploded. Star Trek and Star Wars quickly became her first and favorite fairy-tales. She began to imagine a world where all things belonged, where science and time melted into make-believe and magic.

But that magic seemed out of reach for Candie. Severely dyslexic, she struggled in school and her disability went undiagnosed for years. It wasn't until the fifth grade that Winnie the Pooh came to her rescue with books on vinyl. From that point on, Candie devoted her life to reading. And now, at long last, she’s fulfilling her dreams and writing everyday.

Candie currently resides in Pensacola, Florida with her husband, three of their seven children and one cat. Candie's just finishing her BA in English Creative Writing and getting ready to begin her Masters program in Screenwriting. She hopes to see her dreams come to life one day on the big screen.

You have subscribed to alerts for Candie Leigh Campbell.

You have been added to Candie Leigh Campbell's favorite list.

You can also sign-up to receive email notifications whenever Candie Leigh Campbell releases a new book.