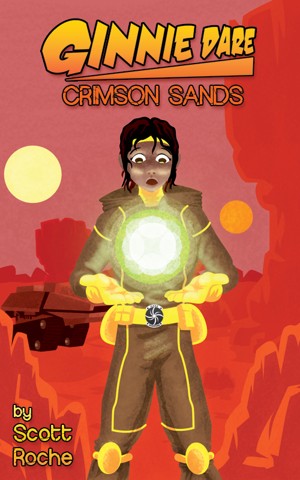 By D. Scott Roche
Rated 4.50/5 based on 2 reviews
Come and solve the mystery of the missing space colony with communications officer, Ginnie Dare, and her family. More
Ginnie Dare is the communications officer for her family’s space faring shipping company. They arrive at Eshu for a routine supply drop and discover that the entire settlement’s population has vanished. Their search of the site reveals nothing out of place, except the people, but ends in a tense confrontation with the natives. During the conflict, Ginnie discovers an alien artifact that may be the
Available ebook formats: epub mobi pdf lrf pdb txt html
First 20% Sample: epub mobi (Kindle) lrf more Online Reader
pdb
Price: $0.99 USD
Buy Add to Library Give as a Gift
How gifting works
Create Widget
Tags: adventure pulp 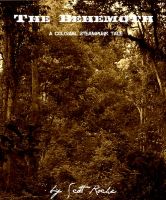 I received a review copy of Ginnie Dare last week, and being in need of a good middle grade read, jumped right in. Mr. Roche has written an engaging work of science fiction for the middle grade reader, and I will be reading the sequel.

Despite advance notice in the form of some comments in the book's information, it took me a while to figure out why the name "Ginnie (Virginia) Dare" seemed familiar. Mr. Roche has taken inspiration from the story of the Lost Colony of Roanoke, VA, and named his main character after a girl from that colony (I think "inspiration" is the best way to put it--this is far from a retelling of the story).

Ginnie is the 13-year-old (?) communications officer on her father's interplanetary merchant ship, and is definitely smart and able beyond her years. This may require a certain willing suspension of disbelief, but I consider that pretty normal for young heroes, and Roche carries it off convincingly. Ginnie is by turns over-confident and painfully aware of and/or annoyed by her own youth and inexperience.

When the Dare Company ship Helena arrives at the planet Eshu, they can't find the colonists. What they do about it and how Ginnie manages to negotiate between the natives, the military, and a crew of pirates drives the story.

The story caught me up pretty well by about the mid-point, but I did feel it was a little slow to start. In part, I was put off by a font that didn't work well on my Nook, resulting in text that was jammed together and a little hard to read. That is minor and Mr. Roche is working on it. But the story doesn't really take off in any case until the military shows up and there is some conflict to offset the original mystery. The mystery presenting itself without anything concrete to be done resulted in too much thinking and not enough action (though of course in life more thinking and less action is often a better choice, I find this is not really true in the first chapters of a book).

If I were just rating Ginnie Dare on the second half, I would give it four stars, free and clear. The slow beginning, however, leads me to knock it down to three and a half stars. An impatient 11-year-old might put it down before getting to the heart of the adventure, but continued reading will be rewarded.

In baseball terms, this is a Home run! The characters are well developed, and it has an interesting plot line with a few twists along the way. What I loved best is that I can let my kids read it. Well done!

You have subscribed to alerts for D. Scott Roche.

You have been added to D. Scott Roche's favorite list.

You can also sign-up to receive email notifications whenever D. Scott Roche releases a new book.