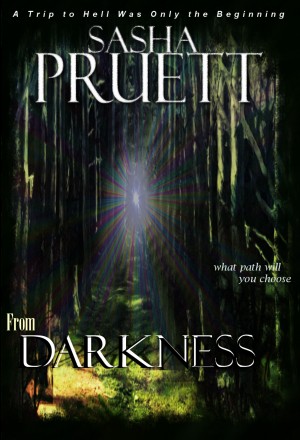 By Sasha Pruett
Rock legend Bane Bronson never thought going through Hell would be the easy part.
Now he has a choice to make, return to the comfort that leads to eternal torment. Or fight through the pain and chaos and rely on the One that leads to bliss.
His eyes may be opened, but does he even care anymore? More
Aging rocker Bane Bronson was used to living on the edge and not even the slow progression of time could mellow him. He was born, lived and was destined to push the envelope further than anyone else and answer to no one, or so he thought. Someone was about to get his attention and send him on a trip unlike any he had ever been on before.
After two trips to the pits of Hell itself Bane made a choice that would affect not only himself, but his marriage, his family and his career forever. Turns out, his brief walk through the darkness of Hell was the easy part. As he questions every decision he’s ever made and his life falls apart around him will he turn to the comfort that leads to eternal torment? Or to the one that leads to freedom?
Can he, his family, his career survive?
Or will he let them all go?
His eyes may be open, but does he even care anymore?

Author Sasha Pruett has been writing for more than two decades in various genres from horror to sci-fi, fantasy and adventure. She resides in the south with her husband of more than twenty years where she enjoys taking care of her home and pets. She is an avid reader and gamer and has many hobbies including music, painting, crafting, knitting and more.
When asked about what started her desire to become a writer she states, "It wasn't really something I decided like some people do, it wasn't one of those, 'When I grow up I want to be a writer,' or 'I'm going to write a book one day.' It was just something that was a part of who I was; who I am, something that was natural from the time I could remember, something I did that flowed from me. When I was nine I had an idea that I told my father I was going to write a book from, but that was more for myself and for him since he was always interested in my writing. The thought of being a writer was nowhere in my mind since I had so many other interests until years later when I decided to write down a list of all the different story ideas I had. To my surprise there were nearly two dozen ideas on that list and it quickly grew. That was when it hit me, when I realized I had always been a writer and all those short stories I had enjoyed writing over the years were just practice."
With a binder filled with over one-hundred storylines and rough drafts she has no shortage of material to keep novels coming for years.

You have subscribed to alerts for Sasha Pruett.

You have been added to Sasha Pruett's favorite list.

You can also sign-up to receive email notifications whenever Sasha Pruett releases a new book.