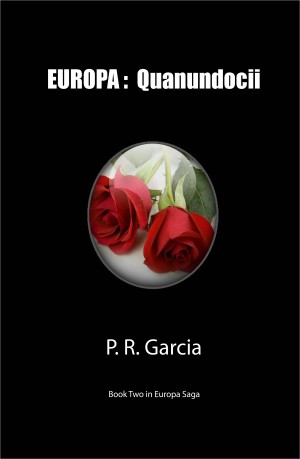 To ensure the continuance of the Oonock race, the Orbs of FarCore developed a most powerful weapon called the “Quanundocii”, a love capable of conquering all. The Orbs have called upon the Quanundocii to save the Oonock race only four times in the past hundred million years. The last was King Enok and Queen Medaron. But with the Queen’s death, the Quanundocii is broken, leaving the Oonocks vulnerable. They sense a new Terrian leader hunts the young monarchs, determined to destroy them and all Oonocks, and fulfill JeffRa’s Vow of Revenge. Without the Quanundocii, the end is near for this noble aquatic race.

The only hope is for Europa to unite with another Oonock in a new Quanundocii. But this cannot happen as long as she is human. She must be an Oonock to become the new weapon. Using their great powers, the Orbs begin to change Europa, transforming her into a true Oonock, rebuilding her at her DA level. But their transformation soon puts her life in mortal danger. If Europa cannot control her transformations, she will die. And with her death goes any chance of saving the Oonock race on Earth.

P. R. Garcia describes herself as a crazy, not-too-grayed haired old lady. Born during the winter of 1951 in Monroe County, Michigan, the youngest of three children, she attended Western Michigan University, where she majored in zoology. While living in Michigan, she became an award-winning basketweaver, carrying on the tradition of her maternal grandmother, Margaret Dark Feather. In 2008 she moved to southern California and became a volunteer at the Birch Aquarium of Scripps Institution of Oceanography and a guide on the Gray whale touring boats. The following year she joined the Whalers, a dedicated group of volunteers from the San Diego Natural History Museum of San Diego, California, whose love of the Pacific cetaceans and other marine life off the shores of California matched her own. As a guide on the Hornblower and Flagship whale-watching boats, she introduced people from around the world to the wonders of the world of the Pacific cetaceans. In 2012 she combined her knowledge of these ocean mammals, her love of science fiction and astronomers’ exciting belief that life exists in the oceans beneath the ice shield of Europa, Jupiter’s ice moon, to create a new trilogy of an alien race from Europa, a race that has lived in our deep oceans for thousands of years. Using legends and known ancient landmarks from Earth’s past, she wove a story of intrigue, mystery, magic and adventure. In 2014 Ms. Garcia added three more books to the story of Europa. In early 2015, she began to tell Europa’s son, Prince Enok’s, story.

Now an international bestselling author, Ms. Garcia is currently working on Book 10, which will be about Prince’s EJ’s twin daughters and the search for the destroyed colony on Mars.

The Europa Saga may be the first multi-generational science fiction series ever written, spanning five generations of the Waters family. Start your adventure with a free copy of book 1 EUROPA Awakenings at https://www.smashwords.com/books/view/633078

For a more traditional account, visit her webpage at http://www.prgarcia1.com

Please remember to leave a review of my book at your favorite retailer.

About the Series: The Europa Saga

Perhaps, the only science fiction saga encompassing five generations of one family. The Europa Saga is a story of betrayal, vengeance, greed, hate, love, discovery, lies and awakenings, aliens and possibilities, expanding across 6000 years of the Waters Family. The saga begins on Earth and will come full circle, as Europa learns the truth of the Oonocks, who she really is and fights against those determined to kill her and her race.

Also in Series: The Europa Saga

You have subscribed to alerts for P. R. Garcia.