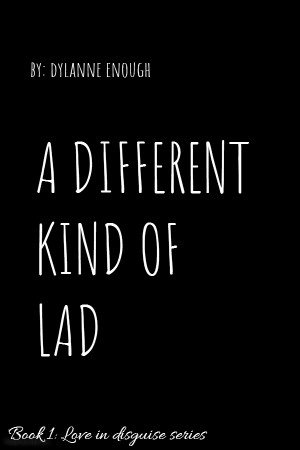 A Different kind of lad.

By Dylanne Enough
Rated 4.86/5 based on 7 reviews
A girl pretending to be a boy, a spoilt sister and her mean brother, a horrible stepmother and an obsessed psychopath...just the recipe for a beautiful love story. Hazel becomes Hector to protect herself but not without consequences. Like falling in love with her mean but handsome boss Wren, attracting the attention of a gorgeous black-eyed madman Jon and making Wren's sister fall in love with her More
Wren Donoghue might be handsome, with intense silver eyes and a body to die for...but he's an A-class jerk. He has scars that will never heal, a permanent limp and a stutter, just the excuses he needs to be horrible to everyone. Until he meets Hector.
A deer trap accident forces Hazel's brother to lie about her identity to keep her safe, thus 'Hector' is born. Hector is just the smallest and most beautiful boy Wren has ever seen, and not only does he feels drawn to him, Hector seems to like him back...a lot! With Wren's sister falling in love with Hector and a gorgeous psychopath obsessed with the unique boy as well, Hector drags trouble wherever he goes.
What happens when Wren discovers Hector is not actually a boy? Will it be in time to save their love from everyone who wishes to destroy it?
Download: epub mobi (Kindle) pdf more Online Reader
txt
Price: Free! USD
Add to Library
Create Widget
Tags: humor historical romance love triangle
About Dylanne Enough

Top ten random facts:
1) All my characters are real, I talk to them in my head all the time
2)Spongebob Squarepants is adorable, and I want to marry him when he grows up
3)Romance novels make my world go round, especially historical ones
4)Mashmallows would be a staple food if I ruled a country
5)Most of my characters have a little bit of me in them eg. my OCD
6)I swear I'm allergic to the colour pink
7)I'm a closet poet
8)I can't see without my glasses
9)I always scream when I get fanmail
10)I believe in soulmates....

I love the novels. its interesting with humour

Wren is an intense type of guy but i loved him! Michelle was hilarious and Jonathan was a sad character. All in all great and pleasantly surprising story from such an amateur author, hope to read more from her as she grows. Awesome love story!

I loved this book!!
I like how the Author outlined Donoghue's flaws in the most sweetest way, couldn't stop reading t once i started.

This book was a little confusing. From beginning to end it was a jumble of first and third person views switching very randomly, which was disorienting to read. And in parts there were mistakes that made it seem like one person was talking when really it was someone else. Switching back and forth from one person to the next without letting the reader know was very hard to follow. Then there were things like a character knowing another's name without overhearing it or having been introduced to them. Repeating a sentence after having just said it or having a sentence make absolutely no sense at all, using or saying something that isn't of the particular time period and just a general incohesiveness were just a few things that made me feel like it wasn't living up to it's full potential.

With all that being said, it was finished well and had a good storyline to keep you interested. I would just recommend a lot of editing, Author. But thank you very much for sharing.

lovely. i enjoyed this book a lot. just great..... i dont know what more to tell you.
It is about a Girl who runs away from home with her jounger brother. she gets hurt and then pretends to be a Boy because it is saver that way.... but she keeps pretending to be a Boy and that leads to a lot af Trouble! verry nice storry and great caracters!

Wonderful story! If you enjoy developed characters and great storyline with enough romance to make it interesting you're gonna love this novel. Wish there was more from this author.

You have subscribed to alerts for Dylanne Enough.

You have been added to Dylanne Enough's favorite list.

You can also sign-up to receive email notifications whenever Dylanne Enough releases a new book.