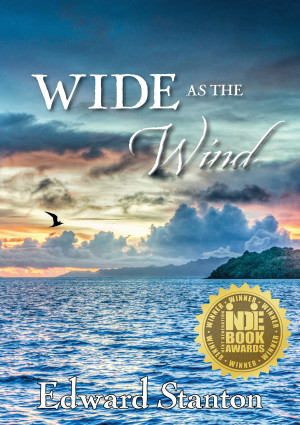 Wide as the Wind

By Edward Stanton
*Winner: Next Generation Indie Book Award (YA Fiction), Moonbeam Children's Book Award (YA Fiction: Historical), and Feathered Quill Award (Teen Fiction)* The lyrical tale of a boy, a girl, their island, and how they saved it. Wide as the Wind is the first novel to deal with the stunning, tragic history of Easter Island. It is both a stirring novel of adventure and a prophetic tale for our times. More
Wide as the Wind is the winner of the 2017 Next Generation Indie Book Award for Young Adult Fiction, the 2017 Silver Moonbeam Children's Book Award for Young Adult Fiction - Historical/Cultural, and the 2018 silver Feathered Quill Award for Teen Fiction. Wide as the Wind was also honored in the 2018 Purple Dragonfly Book Awards in Green Books/Environmental.

The lyrical tale of a boy, a girl, their island, and how they saved it.

Wide as the Wind is the first novel to deal with the stunning, tragic history of Easter Island (Vaitéa). It could be described as quest fiction for all ages in the line of Tolkien’s The Hobbit, but it is set in the real world, not Middle-earth. Wide as the Wind portrays Polynesian voyages across the Pacific Ocean in canoes with no metal parts or instruments: the greatest adventure in human prehistory, as bold as modern space voyages (National Geographic).

When Vaitéa is ravaged by war, hunger and destruction, it falls upon Miru, the fifteen-year-old son of a tribal warrior, to sail to a distant island to find the seeds and shoots of trees that could reforest their homeland. If he decides to undertake the voyage, he must leave behind Kenetéa, a young woman from an enemy tribe with whom he has fallen deeply in love. And if Miru and his crew survive the storms, sharks and marauding ships that await them on a journey over uncharted ocean, an even greater mission would lie ahead. They must show their people that devotion to the earth and sea can be as strong as war and hatred. Wide as the Wind is both a stirring novel of discovery and a prophetic tale for our times.

Edward Stanton's Wide as the Wind is based on ten years of travel and research on Easter Island, whose name he has changed in his novel in order to extend its imaginative reach to all of Polynesia. Born in Colorado and raised in California, he resides in Kentucky after having lived in Mexico, Argentina, Uruguay, Chile and Spain. Stanton is the author of eleven books, some of which have been translated and published in Spanish, Arabic and Chinese. Road of Stars to Santiago, the story of his 500-mile walk on the ancient pilgrimage route to Compostela, was called one of the two best books on the subject by The New York Times. Pulitzer Prize-winning writer James Michener said, "Edward Stanton recounts his adventures with stylish conviction." Stanton has also published fiction, poems, translations and essays in magazines, journals and newspapers in countries throughout the world. He has been a professor of literature at universities in the U.S., Europe and South America. The Fulbright Commission and the National Endowment for the Humanities have awarded him grants for travel, research and writing. His students and colleagues recently published a volume of essays in his honor. At present he is completing a travel memoir titled VIDA: A Life.

You have subscribed to alerts for Edward Stanton.

You have been added to Edward Stanton's favorite list.

You can also sign-up to receive email notifications whenever Edward Stanton releases a new book.