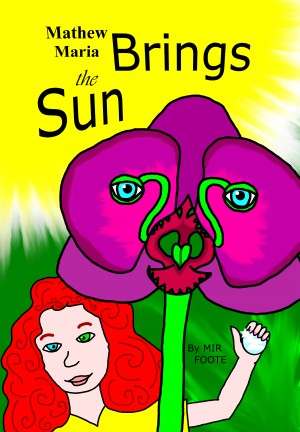 Giant plants are taking over the street. What can be done? Some people want to burn them all. But thanks to her mother’s wonderful invention, Mathew Maria can talk to the plants. Will she save the day? Or will the plants unite to burn down the street? Join this little genius on her adventure filled with excitement, danger, and new friends!
Available ebook formats: epub mobi pdf lrf pdb txt html
First 20% Sample: epub mobi (Kindle) lrf more Online Reader
pdb
Price: $3.00 USD
Buy Add to Library Give as a Gift
How gifting works
Create Widget
Tags: lgbt humor girl power gender identity environmental consciousness
About Mir Foote

Mir Foote grew up in the country, in a small community called Whitehawk. There she had the woods for her playground, dirt roads for her adventures, and an entire wilderness for inspiration. She was lulled to sleep at night by the sound of drums and coyote calls. By day, she explored.

Now, the world is her playground. She spent a year of school in France and another month in Prague. She taught English for a year in South Korea. She has walked on the Great Wall of China, scaled Reichenbach Falls where Sherlock Holmes nearly met his match, and stood in the ruins of Pompeii.

Mir Foote is a world traveler, an amateur linguist, and lover of the written word. Currently, she is looking into the far reaches of the past and future, exploring new stories, and working on her next book.

About the Series: Mathew Maria

Mathew Maria is very small, but her world is very grand.

You have subscribed to alerts for Mir Foote.

You have been added to Mir Foote's favorite list.

You can also sign-up to receive email notifications whenever Mir Foote releases a new book.