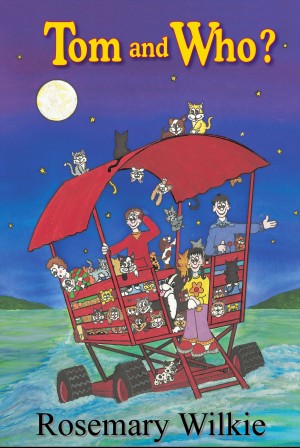 By Rosemary Wilkie
While staying with Grandma, Tom becomes involved in a mystery. Children's pets are being stolen. Why? Tom and his new friends are determined to find the missing puppies and kittens, and embark the scariest adventure of their lives. Tom has some unseen help along the way from ... Who?

Illustrated by Zoe Collard. More
Tom is a lively 9-year old whose mother has a new baby. A car accident puts Tom’s father into the same hospital, so Tom goes to stay with Grandma in a quiet village near the sea. He makes friends with Harry and the twins Jack and Samantha.
The children are upset when pets start to disappear. When some puppies and kittens reappear as stuffed toys, the children decide to act. This involves them in frightening adventures. They find most of the missing animals on a small island you can walk to when the tide is out. With great courage the children outwit the guards and ferry the animals safely back across the incoming tide on an old sea tractor. They are on the right track! Just a few more pets to find.
But Harry disappears on the way home. The police find his bicycle miles away at a railway station and think he has run away, but Tom and the others are convinced that Harry has been kidnapped by the baddies. How will they find him? And the rest of the pets? And who? is helping them? Download Tom and Who? and discover the amazing adventures that follow, including mayhem at the airport . . . .
Available ebook formats: epub mobi pdf rtf lrf pdb txt html
First 20% Sample: epub mobi (Kindle) lrf more Online Reader
pdb
Price: $2.99 USD
Buy Add to Library Give as a Gift
How gifting works
Create Widget
Tags: guardian angel childrens adventure adventure for kids age 7 to 9 electronic pets robot puppies burgh island
About Rosemary Wilkie

Reviews of Tom and Who? by Rosemary Wilkie