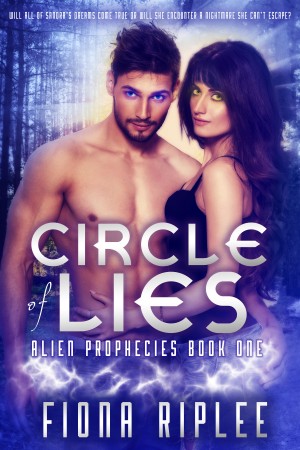 As a former alien M83 soldier, Raz Donovan vows to never get involved in the fight against humans again. Once Raz realizes the extent of the Sixxer destruction he is forced into a battle that will include fighting his heart. Sandra Robins is drawn to the mysterious Raz. She'll be thrown into a world where it's hard to tell the truth from the lies. There is no turning back as she falls in love. More
Raz wants Sandra. He can’t have her. Chasers are on their tail and having a human tag along–no matter how much he craves her–is foolish. Their brief affair must end.

Sandra needs Raz. She’s found the love of her life and refuses to be left behind. When she discovers the truth of who or what Raz is, an alien Transor, she has little choice but to save her lover from her ex-husband’s deadly virus. Yet, beneath all the lies what can she really believe?

They fight their desires, but there’s no denying they are meant for each other. Although, Chasers have other plans for the couple, and the secret human organization is ready to capture any Sixxer they find–like Raz’s son, six-year-old Sean.

Raz’s team of fighters do whenever possible to find Sean and keep Sandra safe. But Sandra is the only one with the knowledge and ability to develop a cure for the virus they’ve all been exposed to. She’s not one to stand on the sidelines while the big bad aliens save the day.

I have always been an avid reader of romance and science fiction. I decided to merge my two reading passions together and create my own version of paranormal/science fiction romance. I love creating new worlds where there are endless possibilities for finding love. I grew up in a small town in rural Pennsylvania and I am currently living in Indiana with my hopelessly romantic husband (who would never admit it under torture), the cutest and craziest toddler I’ve ever seen, and two mischievous dogs. While I haven’t sailed around the world I have been to Jamaica where I was married beside the ocean and in a previous career traveled to Germany and Switzerland.

About the Series: Alien Prophecies

A race of human-like aliens called Sixxers are living on Earth. They were left behind millennia ago to fend for themselves on this planet. They are in a battle against human military and scientists who are after their power, which is a form of electrical energy derived from something called the Nexus. Humans want the supernatural power so they can gain control of the world, but the unnatural link created between Sixxer power and humans leads to an uncontrollable forces from both species. Some Sixxers await the beginning of the prophecy when their people will return to Earth to claim it as their own. Will the ancient ones free the Sixxers or enslave everyone?

You have subscribed to alerts for Fiona Riplee.

You have been added to Fiona Riplee's favorite list.

You can also sign-up to receive email notifications whenever Fiona Riplee releases a new book.