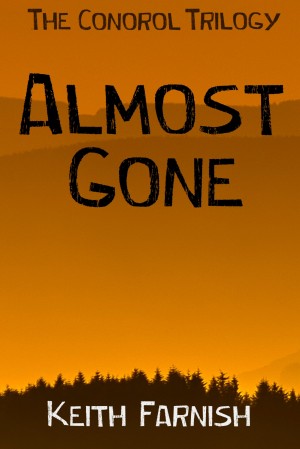 By Keith Farnish
UPDATE: All profits from this eBook will go to Survival International

Almost Gone is a story about three ordinary people searching for answers in a threatened world. As Caeleb, Merod and Eoran travel their own paths, they discover secrets about themselves, each other and the place in which they live, but can they find a way of stopping what is causing these terrible things to happen? More
UPDATE: All profits from this eBook will go to Survival International, the organisation for Tribal Peoples

"I kept the early watch as Eoran slept almost silent, upwind of the fire. Watching him in his otherworld it seems absurd that either of us could have thought this would end well. He’s no more an Elder than me and curled up like that he could be mistaken for a child, no lines of age or marks of wisdom and barely a scar from all his adventures. Looking down at my hands in the flickering light I imagine using them to protect us from something bad, something unknown. They seem to clench without my help, but I’m not convinced. Too soft; too new."

Set in a place that may be familiar to many, in a time that could be now, but within a culture untouched by civilisation, Almost Gone follows the search for a threat to the world in which three young people live. As Caeleb, Merod and Eoran’s journeys weave across the rich and sometimes dangerous landscape they start to understand the true nature of the change that is happening to the world in which they live, to themselves, and to their relationships with each other, and the sacrifices they will have to make to keep any one of these intact. Above all it is a book about the need for connection in a changing world.

Almost Gone is the first book of the Conorol Trilogy.

This download contains a special READING GROUP GUIDE for use by book groups and schools.

Keith Farnish is a writer, volunteer and activist who, in a former life, was an IT professional. He lives in the Borders of Scotland with his wife and two children.

He has been involved in environmental issues for a long time - for a large part of that as an active member of various environmental organisations, before becoming disillusioned with the mainstream environmental movement. He is continually striving to minimise his impact on the natural world.

Keith founded The Earth Blog in 2006, intended as a source of inspiration for people who want to be challenged, and offering uncompromising solutions to difficult problems. He also became a regular contributor to high-profile websites including Culture Change, Resilience and Nature Bats Last, and founded the Unsuitablog, which became a highly influential anti-greenwashing hub.

In 2009, his first non-fiction book, “Time’s Up! An Uncivilized Solution to a Global Crisis” was published by Green Books, and rapidly became a classic of the anti-civilization genre, particularly in the USA. His second book “Underminers: A Guide to Subverting The Machine” follows up on the work started by Time’s Up! in a more practical vein. It was published by New Society in 2013.

He made the decision to become a storyteller, after about a decade in radical environmental activism. The move to fiction was inspired by the deep connections he's continually trying to create between people and the natural world in his daily life. A serial volunteer in his Scottish Borders village, he is also a bushcraft teacher who encourages young people to get out into the real world. Where he lives, and the people around him both inspire Keith's writing.

You have subscribed to alerts for Keith Farnish.

You have been added to Keith Farnish's favorite list.

You can also sign-up to receive email notifications whenever Keith Farnish releases a new book.