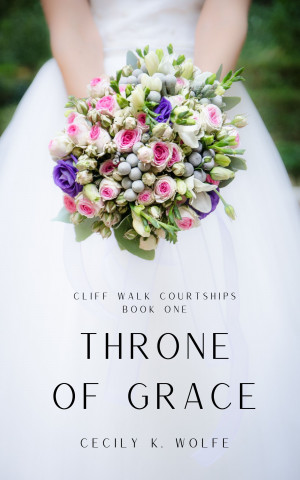 By Cecily Wolfe
Rated 2.00/5 based on 1 reviews
Josie is content as a maid in a rich cottager's mansion along the Cliff Walk of beautiful Newport, Rhode Island, but the arrival of her employer's handsome, pensive son tempts her into a relationship that while chaste, is forbidden between their social classes. More
Five Star Readers' Favorite Award

She had me RIVETED from page one. Interviews and Reviews

This book does an excellent job of grounding the reader in the SPIRITUAL lives of the characters, intimating their spiritual discoveries in such a way as the reader can pick them up and apply them one's personal life, and telling a story that leaves you wanting more. What else can one ask of Christian fiction? author Brett Armstrong

Readers who love a HAPPY ENDING will not be disappointed. author Stacie Eirich

I am not a terribly religious person and yet the prose here and the charm it possesses - it really is of no matter. This is a LOVELY STORY. author J.P. Willson

Josie is content as a maid in a rich cottager's mansion along the Cliff Walk of beautiful Newport, Rhode Island, but the arrival of her employer's handsome, pensive son tempts her into a relationship that while chaste, is forbidden between their social classes in the Gilded Age of 1893.

After travels abroad have led Arthur in search of a deeper connection with his Lord, he returns home to find love with his mother's maid, a Christian girl with a heart full of love and charity.&nbsp; Can they overcome their families' refusal to accept their attachment, or is their relationship doomed from their very first meeting on the romantic Cliff Walk?

Cecily Wolfe writes contemporary young adult and women's fiction, as well as contemporary sweet romance with her teenage daughter under the name Alessa Martel. She is also the author of the award-winning, best selling Cliff Walk Courtships Christian historical romance series as well as the upcoming sequel series, Cliff Walk Cousins, under the name Cecily K. Wolfe. She graduated from Kent State University with degrees in English and library science, and enjoys her career as a librarian in Cleveland, Ohio, where she lives with her daughters - both of whom are published authors.

Subscribe to her newsletter for FREE downloadable bookmarks, giveaways, and updates: http://bit.ly/2V9gAlS

About the Series: Cliff Walk Courtships

Josie Warren works as a maid for the Davenports, the richest family in Newport, Rhode Island. She doesn't have marriage prospects but desires a man with Christian values. Arthur Davenport arrives home after living for several years in Europe. He meets Josie and begins a friendship with her despite the situation she works for him. The friendship develops into love as their position in society comes between them.
I thought the book was well written. I enjoy the plot of two different classes coming together for love. The book was full of Josie and Arthur thinking about each other. It didn't have any suspense. As a reader, I wanted them to do something. Eventually, they worked toward building a homeless shelter, but it took a long time to establish a goal. I like secondary stories so I enjoyed the potential romance between Josie's mother and the doctor.

You have subscribed to alerts for Cecily Wolfe.

You have been added to Cecily Wolfe's favorite list.

You can also sign-up to receive email notifications whenever Cecily Wolfe releases a new book.