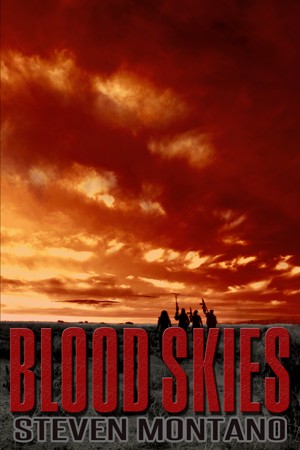 By Steven Montano
Rated 4.80/5 based on 5 reviews
Post-Apocalyptic Military Dark Fantasy. With Vampires.

An elite team of soldiers and mages of the Southern Claw Alliance pursues a renegade witch, whose stolen knowledge threatens the future of the human race and their ongoing war against the vampire controlled Ebon Cities. More
In the time after The Black, human survivors of the Southern Claw Alliance clash with vampire legions of the Ebon Cities in a constant war for survival. Earth as we know it has been forever damaged by an arcane storm that fused our world with distant realms of madness and terror. Things that once existed only in our nightmares stalk the earth.

Now, humanity is threatened by one of its own.

Eric Cross, an enlisted warlock in the Southern Claw military, is part of an elite team of soldiers and mages in pursuit of a woman known as Red -- a witch whose stolen knowledge threatens the future of the human race. The members of Viper Squad will traverse haunted forests and blighted tundra in their search for the traitor, a journey that ultimately leads them to the necropolis of Koth.

There, in that haven of renegade undead, Cross will discover the dark origins of magic, and the true meaning of sacrifice...

I’m Steven Montano, an accountant who thinks he’s a writer, based mainly on the fact that I managed to get a few D&D adventures published roughly 2,000 years ago. I’ve been writing as a hobby for almost 20 years.

I’m currently hard at work on the “Blood Skies” project, a post-apocalyptic dark fantasy fiction series. It has magic. And guns. And vampires. Really, what more could you want?

Original and breathtaking, Blood Skies takes the whole ‘dystopian-fantasy’ genre up several notches. With a captivating plot and fantastic writing, author Steven Montano is sure to please the hearts and minds of fantasy lovers everywhere with his dark novel. The world is in a perpetual state of chaos, and filled with almost every supernatural creature you can imagine. Warning, this is not a light, fluffy read, and it will take you to the deepest pits of the human psyche. But the tension is real and the characters struggles pull you along to the last page. I only noticed a few errors, which is totally forgivable and didn’t lessen my enjoyment any. There were a few questions that I still had at the end, but since it is the beginning of the series I imagine they will be answered soon. Off to read the next one!!

(reviewed the day of purchase)
Darla Ortiz reviewed on Sep. 5, 2012

I struggled with trying to decide whether or not to give this novel 4 or 5 stars. Only rarely do I give out 5, but this book won out eventually simply for the fact that I couldn’t put it down and read it in one night (pretty rare), and also because I haven’t stopped thinking about it since! It is memorable and haunting, with some of the best characters I’ve come across in a long time. But it was the scenery and the way that Steven Montano created the world-building as the setting that has really stuck in my head. The imagery was so descriptive and real-feeling…I got the goosebumps more than once and had to keep reminding myself it was just a book! It felt like I was watching a movie at times, and the writing was better than most I’ve seen in this genre. It was almost literary, but still easy to read. Cannot recommend this book highly enough and can’t wait to get my hands on the next one.

Just when I’ve thought I’d read it all, something comes along and totally blows my socks off! It isn’t often that I am genuinely impressed by an Indie author, as so many of them make the same mistakes over and over (too much ‘telling’, info dumps, poor editing…) but this was not the case with “Blood Skies” by Steven Montano. Right away I was pulled into this dark and twisted future/fantasy world he created (set in the time “AB”—“After the Black”) when the world is nothing like we know it to be, dark and evil creatures rule the lands, magic is everywhere, and humans are at the bottom of the food chain. It was absolute gripping storytelling and I am really excited to read the rest of the “Blood Skies” series!!

(reviewed the day of purchase)
Jhonni Parker reviewed on Aug. 30, 2012

This book was epic! First let me just start off by saying that I had totally sworn off the whole “vampire thing”, and let out a small groan when I realized that this post-apocalyptic/ sci-fi/fantasy novel had lots of them. But I soon realized that this was no ordinary vamp novel, in fact if they were ALL like this I’d be in heaven! THIS is dark fantasy done right! The writing was evocative and disturbing and beautifully descriptive, down to the creepiest detail. I read this book cover to cover in the course of 2 nights and am anxious to start the next asap!

(reviewed the day of purchase)
Infinity Dreamt reviewed on July 15, 2011

If you ever wanted to hunt down some vampires, here is the squad to take along to do it. Bring your guns, bows, grenades and machetes, but don't leave your warlock behind. You're going to need Eric Cross to survive after The Black, the apocalyptic hell that our world has become.

When Cross' sister gets taken, his original mission of hunting down a traitor takes an unexpected turn. He will be up against some brutal vampires, but expect to find golems, unicorns, spirits, zombies, massive wolves and a world where being a normal human barely makes the cut anymore. In this war you will have to accept and become a part of the fantasy if you are to stand a chance of surviving, as there are arcane nightmares everywhere.

Beautiful imagery and writing in here that will help you accomplish just that, at a pace full of action. But don't dream too deep into it all, as you already have a short life expectancy by being a warlock, and the living are soon to become the fantasy.

I will be watching for future works from Steven Montano, as this debut novel, Blood Skies, will stay on my shelf for reading again in the future.

You have subscribed to alerts for Steven Montano.

You have been added to Steven Montano's favorite list.

You can also sign-up to receive email notifications whenever Steven Montano releases a new book.