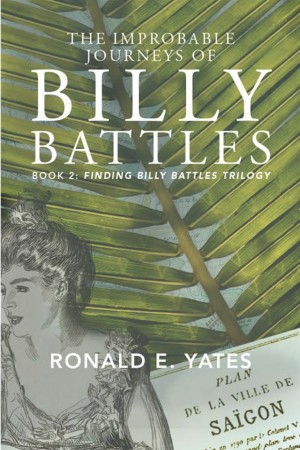 The Improbable Journeys of Billy Battles

By Ronald E. Yates
Rated 5.00/5 based on 1 review
The Improbable Journeys of Billy Battles is the second book of the Finding Billy Battles trilogy.The trilogy tells the story of a man who is born in 1860 and who dies in 1960. In between Billy lives an improbable and staggering life of adventure, peril, transgression, and redemption. Then Billy mysteriously disappears. For several decades his family has no idea where he is or what he is doing. More
Billy Battles is definitely not in Kansas anymore.

As Book 2 of the Finding Billy Battles trilogy opens, Billy is far from his Kansas roots—and his improbable journeys are just beginning. He is aboard an ocean liner sailing to the Mysterious East (Hong Kong, French Indochina, and the Philippines), among other places.

The year is 1894 and aboard the S S China Billy meets a mysterious, dazzling, and possibly dangerous German Baroness, locked horns with malevolent agents of the German government, and battled ferocious Chinese and Malay pirates in the South China Sea. Later, he is inadvertently embroiled in the bloody anti-French insurgency in Indochina–which quite possibly makes him the first American combatant in a country that eventually will become Vietnam.

Also in Series: Finding Billy Battles: An Account of Peril, Transgression and Redemption

Reviews of The Improbable Journeys of Billy Battles by Ronald E. Yates

William Fitzroy Raglan Battles lost his wife at the end of Volume I. In despair, he voyages to the Orient to meet an old friend who lives in Saigon. En route, a shady German, who claims to be a Pinkerton’s detective, threatens a recently widowed German baroness. Katherina, who hails from Chicago, killed her husband in defense of her brother, Manfred, as the baron was in the process of beating him to death with a poker. Her well-connected father managed to divert the responsibility from his daughter; however, she felt it prudent to travel to Manila where Manfred operated a hardwood business. The baroness enlists the aid of Battles to protect her from the alleged detective who proves to be an agent for the German government. Through a series of convoluted machinations, Battles and Katherina manage to have their nemesis Shanghaied to Africa. End of phase one.

In phase two, Battles settles in Saigon with his old friend, Signore Difranco, a wealthy pepper planter. While in Viet Nam, known then as Nam Ký, he is determined to find another old friend from his days in the American West, Giang Ba. Unfortunately, Ba has joined the resistance fighting to oust the French occupiers. This leads Battles into a heated battle on the side of the rebels. When Manfred and Katherina visit Saigon, Battles finds that he is increasingly smitten with the lovely baroness. There is another change of scene. The three return to Manila, from where, eventually, Battles accompanies Katherina back to the States, and they part company. During this interlude, the German agent, Oskar Eichel, reemerges and puts Battle’s family in peril. Then there comes the outbreak of the Spanish American War when Katherina urges Battles to travel to Manila to check on her brother’s wellbeing. End of phase two.

Back in Manila, Battles watches as the Americans make short work of the Spanish, but he is dismayed when he realizes that the United States intends to occupy the archipelago. The Filipino resistance wants freedom from occupation and intends to fight. Reluctantly, Battles and Manfred accept brevet commissions as captains attached to the Kansas Volunteer Regiment. During his less than willing military career, Katherina arrives in the Philippines and voices strong objections to the two men in her life being involved with the army, and much more ensues.

Billy Battles is an old Kansas sand cutter who hobnobs with the likes of Wyatt Earp and Bat Masterson. This is the second installment of the Finding Billy Battles trilogy that I have read, and I am still not quite sure what a sand cutter is. Mr. Yates is a master of western jargon. He infuses The Improbable Journeys of Billy Battles with a plethora of colorful sayings and expressions that give the characters verisimilitude. This is a 160,000-word story that takes place in numerous exotic settings with ceaseless action. The characters are extremely well developed. The prose is fluid and the dialogue convincing. This reader and reviewer strongly recommends the Finding Billy Battles series to everyone who enjoys historical fiction or just likes to read about sand cutters.

You have subscribed to alerts for Ronald E. Yates.