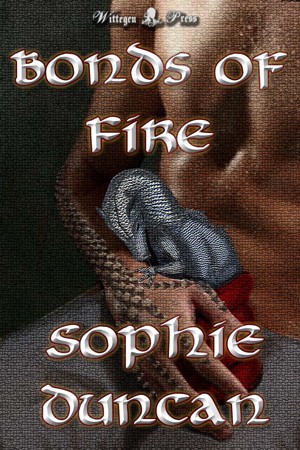 By Sophie Duncan
Rated 4.38/5 based on 8 reviews
Drekken is a dragon warrior. Bonded to his dragon, Miri, together they lead a squadron of fliers. Yet, nothing in his life could have prepared Drekken for his greatest challenge: babysitting.

Stranded after a deadly battle, separated from his squadron and Miri, Drekken finds himself the only hope for two young empaths and their nursery group of hatchling dragons. It is a challenge he cannot fail. More
Drekken is a dragon warrior. Bonded to his dragon, Miri, together they lead a squadron of fliers. His fliers respect him, his enemies fear him, his reputation precedes him. Yet, nothing in his life could have prepared Drekken for his greatest challenge: babysitting.

Stranded after a deadly battle, separated from his squadron and Miri, Drekken finds himself the only hope for two young empaths and their nursery group of hatchlings. He must lead them all to safety and, along the way, discover some truths about himself.
Download: epub mobi (Kindle) pdf more Online Reader
rtf lrf pdb txt
Price: Free! USD
Add to Library
Create Widget
Tags: gay fantasy dragons dragon gay romance augmented human dragon bond baby dragons
About Sophie Duncan

Perfect for a quick afternoon read, fans of dragons will love this one. Dragon bonds, family bonds, and a new relationship--plus some baby dragons--abound in this quickie. Love to see more!

I enjoyed these characters and their world enough that I wish Duncan had spun this into a full-length novel. As a 20k word novella, it could have done with more world-building and fleshing out of environment, backstories, and relationships. Drekken is a great character about whom I'd love to read more, and all the rest felt a little bit short-changed. Except for the baby dragons!

Oh, I want so much more of this. It worked well as a short story, but there was enough to be expanded into a full length novel (always my preference). I love that, despite being short, the romance didn't feel rushed. In fact it doesn't really even come to a head in the story. I did feel a little bit like Malachi was shorted. Drekken's attraction to Yakov is so overt that, despite being told Drekken is falling for Malachi too, he feels secondary. I was a little disturbed in the beginning because Yakov and Malachi are referred to as youths for so long that I was visualising them as 12ish. So when the attraction started heating up I got a little scared. I heaved a huge sigh of relief when their ages were finally addressed. They are 19 & 20.

I adored the way the reader is keyed into Drekken's emotions and even though he is a 'big bad warrior' he is able to show soft emotions without ever looking weak. I also really liked the way humans and dragons for families. It made for a really intriguing world.

All in all I thought this was a touching, well-written story that I would love to see more of. I'm curious about the cause of the war, how Drekken and Miri manage as parents, and how Yakov and Malachi progress. I'd love to witness Drekken's attempt to live near his mothers again and to see him try to keep from being further organised. Thrilled to have read it.

This is a good story line I really like the connection between the dragons and the people. I am a true fan of dragon story and this was a good one. I wish it was a little longer.

This was an enchanting fantasy, pictorial in its descriptions and mesmerizing in its adventurous plot. Drekken and his charges, a combination clutch of youth empaths, dragons and hatchlings now in his care, were believable and endearing. A sweet story.

I loved this! This could quite possiblt be one of the best stories I have read so far. Great job!

I did not want this story to end!
I think my mother's instinct kicked in and adopted Drekken as soon as he bonded with the baby dragon. Wonderful world, excellent characters, superbly written emotions. Great job!