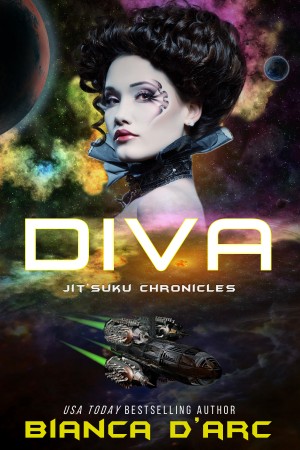 By Bianca D'Arc
What happens when Special Forces hero John Starbridge finally meets the intergalactic superstar known only as Diva? Sparks fly, passions ignite, and the universe is about to go supernova. But not if John and Diva have anything to say about it. Divided by their loyalties, united in trying to save mankind, they will put it all on the line to prevent all-out war. Or die trying. More
She needs only one name...Diva.

Galactic superstar. Brilliant musician. Chanteuse extraordinaire. But she has a number of deep, dark secrets. For a woman who lives her life in the spotlight of a billion lenses, she’s managed to lead a double life, full of intrigue. When her path crosses that of Captain John Starbridge everything changes. Here is a man who sees beneath the mask she wears for the public. Here is a man in love with the woman behind the music into which she pours her soul. Here is a man who could be hers…if they didn’t both have duties that must be fulfilled.

A Special Forces hero who sees the woman beneath the facade…

John’s allegiance has always been to the human race and his band of Spec Ops brothers, but Diva’s music has accompanied him on every deep space mission he’s ever undertaken. Her voice croons him to sleep in his lonely bunk each night and her intense lyrics haunt him throughout his days. When he finally meets the object of his fascination, he realizes there is even more depth to her than he expected. He gives her his heart, though he knows it’s likely a futile gesture. What would a superstar like her want with a plain old soldier like him?

A galaxy in peril…

Circumstances throw them together and tear them apart, while enemy forces gather to invade the galaxy they both try—in their own ways—to protect. She will have to walk into the lion’s den in order to save the galaxy…and perhaps, the man she loves. If there’s a way, she’ll find it, but it might just be the mission that finally breaks them both once and for all.

You have subscribed to alerts for Bianca D&#039;Arc.