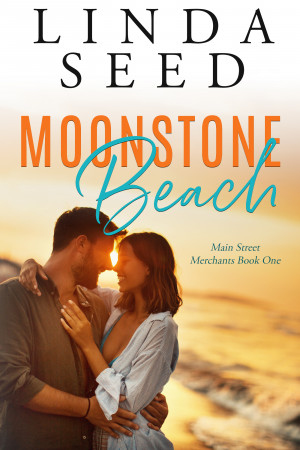 Kate Bennet owns a small bookstore in the breathtaking Central Coast town of Cambria, California. Two years out from a divorce that left her emotionally fragile, she’s starting to think that maybe she’s ready for love again—or at least for a fling with a hot man. Jackson Graham is a local chef who’s controlling when it comes to food, careless when it comes to love, and temperamental when it comes to just about everything.

When Kate’s friends set things up between Kate and Jackson, she expects some casual pleasure followed by a hasty goodbye, but Jackson’s long-term crush on Kate means that he’s in this one to win. The problem is, neither he nor Kate knows whether he can change the self-defeating habits that usually send women scurrying for the door.

Linda Seed, a former journalist, lives in Cambria, California, with her husband, art writer John Seed, and their children. Linda’s romances, including the Main Street Merchants series and the Delaneys of Cambria series, are set on California’s Central Coast.

Linda began writing novels early in life, authoring her first—a Breakfast Club–style saga of teenage angst—when she was seventeen. She came to the romance genre considerably later, deciding well into her forties that the world probably already had enough angst and needed stories of love and hope. Her debut novel, Moonstone Beach, was selected as a Barnes & Noble top pick.

Sign up for Linda's newsletter at the following address: https://landing.mailerlite.com/webforms/landing/d3n1g8

About the Series: Main Street Merchants

Kate Bennet, Genevieve Porter, Rose Watkins, and Lacy Jordan are bound by friendship and by their mutual love of their home, the breathtaking beach town of Cambria, California. They have their work in the picturesque shops of Main Street, and they have each other. The only thing missing is love.

It was a good read.

A fun but mindless romance. If you want an intelligent novel don't bother, but if you want a light holiday read with a happy ending go for it

You have subscribed to Smashwords Alerts new release notifications for Linda Seed.

You have been added to Linda Seed's favorite list.

You can also sign-up to receive email notifications whenever Linda Seed releases a new book.