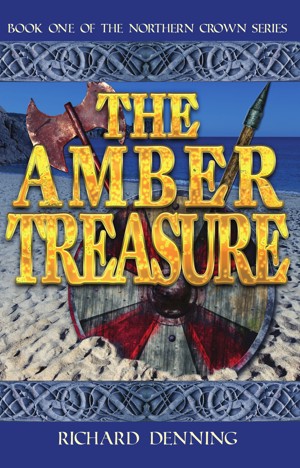 By Richard Denning
Rated 4.33/5 based on 3 reviews
“I will take care of the body of my lord and you can carry the sword, story teller. For all good stories are about a sword.”

Cerdic, the nephew of a warrior, dreams of the glories of battle. When war comes for real, his sister is kidnapped, his family betrayed and his uncle's legendary sword stolen.

Cerdic is thrown into the struggles that will determine the future of 6th century Britain. More
“I will take care of the body of my lord and you can carry the sword, story teller. For all good stories are about a sword.”

The darkest years of the Dark Ages. Britain in AD 597: a land very different from today. Divided into dozens of warring kingdoms - these are the birth pangs of the nation we know today. Life can be short, violent and brutal.

Cerdic, the nephew of a warrior, dreams of the glories of battle. When war comes for real, his sister is kidnapped, his family betrayed and his uncle's legendary sword stolen.

Cerdic is thrown into the struggles that will determine the future of 6th century Britain.

He must find courage to lead his people in one of the decisive battles of his time - a battle which could have seen the end of the English in the North of Britain.

Hi - I am Richard Denning. I was born in Ilkeston in Derbyshire and I live in Sutton Coldfield in the West Midlands. For 27 years I worked as a GP before leaving medicine to focus on writing and games.

Activities and Interests
I am a writer with a strong interest in historical settings as well as horror and fantasy.

Reading - Well I love to. Here are some of my favourite books
Lord of the Rings
Sharpe Series (Bernard Cornwell and his other books)
Eagle Series Simon Scarrow
Disk world books - Terry Pratchett
Neverwhere Neil Gaiman

Gaming
I am also a keen player of board games and other games and run UK Games Expo (the UK's largest mixed format Games convention). I am a game designer and have pubished several games one of which was inspired by the Great Fire on London.

My websites
For my writing projects go here: http://www.richarddenning.co.uk
For more on Great Fire: London 1666 (the board game): http://www.medusagames.co.uk
Find out more about UK Games Expo: http://www.UKGamesExpo.co.uk

About the Series: Northern Crown

Historical Fiction in Dark Ages Britain ...all good stories are about a sword.

The Northern Crown series follows the story of a young nobleman - Cerdic as he lives through the darkest years of the Dark Ages. Through his eyes we witness the climatic events that forged the nations of Britain. The series begns in 580 - the year of his birth. By the end of book 5 the story has reached the year 612.

Explore the darkest years of the dark ages with Cerdic.

Reviews of The Amber Treasure by Richard Denning

I love historical fiction and this story did not disappoint.

After a couple of pages I found myself immersed in the deepest part of the Dark Ages, a time we don't really know much about. The author has done admirable research to cast as much light as possible. His writing style is taut and economical, and moves the reader quickly through his narrative. It was a time when the English and Welsh each developed hard feelings toward the other, feelings which to this day persist. One word of caution: descriptions of the battles are violent and unremitting. One reason we call them the Dark Ages.
Reviewed by Steve Bartholomew, author of The Woodcutter and other books.

Right off, I was impressed with the extensive research done in preparing for this writing in order to remain true to the time period. The story takes you on a journey of the tumultuous travels of a great sword. While this story does indeed feature several great swords, it is the story within, of a boy growing into a man, which grips your heart. The characters of the villa and their allies are well developed and endearing. Descriptions of the countryside, towns, people and battles are detailed enough to transport the reader into battle, and inspire sympathy for the boys, without being overly gruesome. While at times the storyline was slow, Denning succeeds in attaching the reader’s curiosity to the character’s quest and fates in order to carry you through these slow spots.

I would recommend this book to those interested in the dark ages, important battles in history, and war stories in general. The ending makes clear that this is not intended to be a stand-alone volume and as such those looking for a new series to read will be satisfied as well. Full disclosure: I have been provided a copy of the book for the purpose of providing a review; however the opinions presented are my own and not influence or dictated by publisher or author.

The Amber Treasure is the story of Cerdic, a young Angle living in the Dark Ages kingdom of Deira at the end of the sixth century AD/CE. During his lifetime Cerdic is fated to find himself in the midst of the last Celtic attempt to drive the descendants of the Germanic invaders from what was once their land. Starting in childhood, Cerdic is as much subject to the legends and songs of the great Northumbrian warlords told by the bards as any other boy. It is how he learns what warfare really means to him as a person that makes The Amber Treasure the gripping and satisfying tale it is.

Cerdic is the son of a farmer of higher rank, the nephew of a warrior lord whose heroic death is the impossible standard for a young man's plans. He lives a secure life in the Villa, the old Roman farmhouse now crumbling but nevertheless symbolic of a time he cannot quite understand. He has every reason to believe his placid life will continue as it is, that is, until Celtic raiders come and steal a precious treasure from the Villa, amber jewelry presented by the king as reward to the great hero's wife and now the possession of Cerdic's mother. The Celts, which Denning calls "Welsh" from the old English word for foreigner, take more than the jewelry. They take other precious things, his older brother's life, his sister as a slave, his innocence and youth and his trust in both a Welsh slave and his own half brother, his father's unacknowledged and bitter bastard. As part of a small force he travels to Welsh Elmet to get his sister and the treasure back and to avenge the violation of his home and trust. His heroism in freeing all the captives leads to his involvement in a larger effort to prevent a huge Celtic force from overthrowing Deira. The constant impact of disappointment, disillusionment and compromise not only constitutes Cerdic's own growing maturity and leadership but sets the stage for his future adventures.

The Amber Treasure is the story of three swords, the image that is the spine of this novel. Cerdic's warrior uncle's sword stands for the heroic heritage the young man longs to live up to. The second is a fine newly forged sword that is too rare and dear for anyone to wield until it is won by an unworthy man. The third is the sword of a long dead Roman that Cerdic takes from the hand of the first man he kills in battle, the sword that is the reality of war to both the young man and to us, the readers. The symbolism here is also emblematic of one of the things about this novel I most appreciated. Unlike so many depictions of the Middle Ages of late, Dennning provides us with a credible disillusion with battle and glory that is untouched by false modern sensibilities. Cerdic's falling out of love with his uncle's legacy is the natural outgrowth of real experience, coming from an intelligent and reflective mind. It is a grim recognition of the consequences, not a lecture from a distant post-modern future.

Denning presents us with an interpreted early England that does not much stray from what is known but rather offers a flavor of it enhanced with engrossing descriptions, such as the King's hall, the nature of shield wall battle, the stink and fascination of the city of Eoforwic.

The author has a knack with characterization as well, constructing distinct and consistent main and secondary characters, Cerdic's family and friends, the leaders he watches for how to inspire and also not to inspire men and how to make decisions, the enemies who become clearly human to him, and the two young men who challenge his prejudices. Along with the imagery of the swords, the common binding of the novel is a bard, Lilla, an almost unworldly figure who represents the illusion of glory. You know Cerdic has fully matured when he turns to Lilla at a critical moment and tells him to tell his tale another time, for something more important must come first.

This novel is intended to be part of a continuing story and as such is told by Cerdic from the perspective of many years later in his life. I look forward to what Denning does with this.

All in all, The Amber Treasure is a strong and engaging tale told with skill and eloquence, satisfying and yet thought-provoking by an able storyteller.

You have subscribed to alerts for Richard Denning.

You have been added to Richard Denning's favorite list.

You can also sign-up to receive email notifications whenever Richard Denning releases a new book.