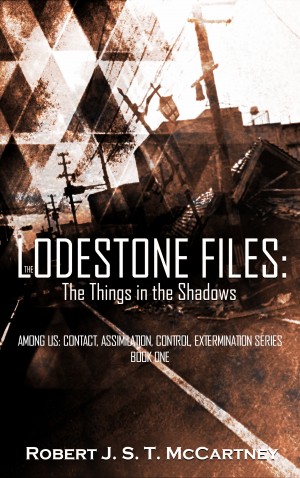 The Lodestone Files: The Things in the Shadows

By Robert J. S. T. McCartney
Idris Sinclair is an average teenager who enjoys helping his family run their classic 50's themed diner. One night, however, is going to change everything he knows about everything and everyone. On Earth and off it.

Some things in life are better where you don't know what's going on. Like knowing your government is betraying your trust More
Idris Sinclair lives a rather typical life; helping his family run their cherished diner. However, all the normalness he knows in life is about to go straight out the window when he happens to break into an abandoned van in the restaurant's parking lot. He discovers a small weapon's stockpile and various files, involving affairs foreign to him.

As night begins to set in, the family is involved in one of our government's most heinous and dastardly secrets involving entities, not of this world.
It walks among us. It could be anyone—or anything. Suspect everyone you know, or you pass on the street. There is nowhere where you are safe. Run all you want; it will only make you taste more delicious to it.

It's too late. It already knows where you are.

Robert J. S. T. McCartney is an author and the founder of A.B.Normal Publishing and Media Group.

He draws his inspiration from his nightmares and dreams, as well as the many forms of music. He says that his inspiration can be born from anything, and he is always writing down ideas, or making up outlines of stories.

He quotes his favorite authors as H.P. Lovecraft, Isaac Asimov, Edgar A. Poe, J. R. R. Tolkien—to list a few of the many. He loves horror, science fiction, fantasy, and comedy. He is a big fan of Simon Peg, and Nick Frost.

He never used to like writing in high school, and always disliked English class. His sentiments started to change his senior year, where he did research papers on the absurdity that politicians and groups labeled video games as the cause of violence.
Writing began to become his passion after, he and his family were in a near fatal car accident in 2008. Now he likes to write—unhinged—and continues to do so at his Knoxville, TN home with his wife, two daughters, and two cats.

When he is not actively writing stories, he likes to play video games on both PC and console. His most popular played game being World of Warcraft, which is responsible for him meeting his wife of nine years.

Reviews of The Lodestone Files: The Things in the Shadows by Robert J. S. T. McCartney

Would you like to favorite Robert J. S. T. McCartney?

You have been added to Robert J. S. T. McCartney's favorite list.