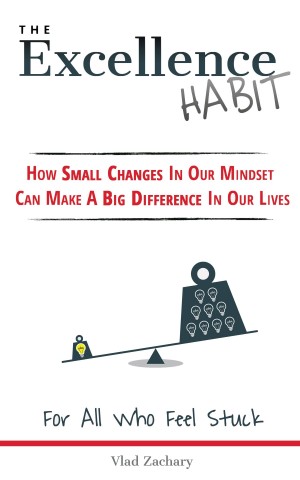 The Excellence Habit is biography of an idea, and the idea is simple. The main source of success is excellence, and excellence depends more on our internal circumstances. Grit, determination, and the discipline to put in the hard work as a matter of habit, and not a matter of need, are crucial. The Excellence Habit is a reminder that we are the owners of our success. There are no magic formulas, shortcuts, or secret sauce. We will learn from many, yet the most important steps, we need to take on our own. Over the course of our adult life, it is always us, who have the most power. We will not always be in control and nobody is. But we can choose to maximize our effect on this planet, on our loved ones and on our personal fulfillment by building an Excellence Habit.

The Excellence Habit examines the distinction between success and excellence. Success is achieving high goals. Excellence is doing the right thing, even when not driving towards any goal. It is a small mindset shift, which will produce big results. Excellence can and will lead to success. Success, on the other hand, can be the biggest enemy of excellence. More often than not success is measured in social influence, recognition and wealth. For those practicing it faithfully - Excellence is its own biggest reward!

Vlad Zachary grew up in Sofia, Bulgaria. During his college years, he built a name as a journalist for pro-democracy periodicals. As a student, Vlad also made his way onto the national TV scene in Bulgaria, where he anchored a leading, live news show. A few years later, he came to the United States, earned a Babson College MBA, and made a career in e-commerce, software, and marketing. Along the way, Vlad produced the Mastering The Job Interview DVD.

Vlad's first book - The Excellence Habit, struck a chord with the readers. The book was launched in January, 2016 and became an instant Amazon best-seller in Business & Money, Applied Psychology, and Leadership. Next Generation Indie Book Awards, named The Excellence Habit a 2016 Winner in the Motivational books category. The book was also named finalist for non-fiction by the Eric Hoffer Award.

You have subscribed to alerts for Vlad Zachary.

You have been added to Vlad Zachary's favorite list.

You can also sign-up to receive email notifications whenever Vlad Zachary releases a new book.