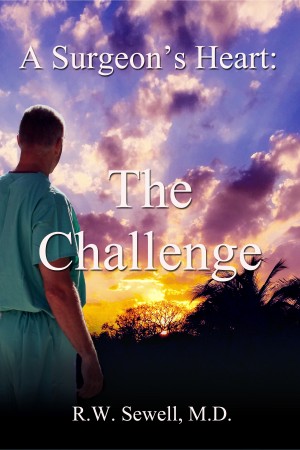 A Surgeon's Heart: The Challenge

By R.W. Sewell, M.D.
The Challenge of a lifetime awaits Dr. Jack Roberts when he
embarks on the creation of an exciting alternative to the increasingly
corrupt American health care system. His vision for the future of
medicine comes alive in the remote mountains of Central America,
as he challenges those around him to join in his passionate pursuit of ...
A Surgeon’s Heart More
After retiring to the Pacific shores of Nicaragua, Dr. Jack Roberts follows a new calling of his Surgeon's Heart. He is frustrated and angry with the growing restrictions, mandates, and penalties imposed on American physicians, so the accomplished pediatric heart surgeon vows to build a new and better health care system, far away from the forces of political power and corporate greed.
He teams up with others who are likewise on the verge of quitting to build a unique network of ultramodern hospitals, where the focus is on the needs of the patients rather than the profits of payers and investors. Jack works tirelessly to pull all the element together with an unspoken promise to change the world of medicine forever. He seeks to create an island of medical freedom amid the jungles of Central America, where inspiration, excellence, cooperation, and innovation are the driving forces.

As the story unfolds, Jack is challenged emotionally, physically, and spiritually, struggling to keep his dream alive, not just for himself, but also for his son. Dr. David Roberts, is a talented and ambitious surgical resident in a distinguished training program in Dallas, Texas, where he, too, experiences many of the same pressures and obstacles that drove his father from a successful practice in nearby Fort Worth a few years earlier. Having grown up watching his father openly display an unwavering devotion to his patients and the traditional code of medical ethics, David seeks to overcome his challenges as he follows his own Surgeon's Heart.

Robert Walter Sewell was born on November 20, 1950, in Independence, Missouri, and moved to Texas with his parents at the age of twelve. He has lived in Texas since, attending Thomas Jefferson High School in Port Arthur and Lamar University in Beaumont, where he received a bachelor’s degree in biology. He went on to the University of Texas Medical Branch at Galveston, where he achieved his medical degree in 1974. He was accepted into the general surgery residency program at the University of Texas Health Science Center in San Antonio and completed his surgical training in 1979.

After finishing his residency, Dr. Sewell immediately began his surgical practice in the Mid-Cities between Dallas and Fort Worth in North Texas. He moved his practice to its current location in Southlake, Texas, in 2003, and remains an active surgeon today, with an emphasis on minimally invasive general surgery at the Texas Health Harris Methodist Hospital Southlake.

As a recognized specialist in the field of laparoscopic surgery, Dr. Sewell has lectured on various minimally invasive procedures throughout the United States and around the world. He is a member of the American Society of General Surgeons (ASGS) and was elected president of that organization in February 2008. He is also a fellow of the American College of Surgeons (FACS) and has served as a governor since 2013. Dr. Sewell maintains memberships in the Association of American Physicians and Surgeons, the Texas Medical Association, the Tarrant County Medical Society, as well as the prestigious Texas Surgical Society.

Along with his wife, Donna, Dr. Sewell resides in Colleyville, Texas, where he enjoys golf, photography, computer graphics, video production, gardening and, of course, writing.

Also in Series: A Surgeon's Heart

You have subscribed to alerts for R.W. Sewell, M.D..

You have been added to R.W. Sewell, M.D.'s favorite list.

You can also sign-up to receive email notifications whenever R.W. Sewell, M.D. releases a new book.