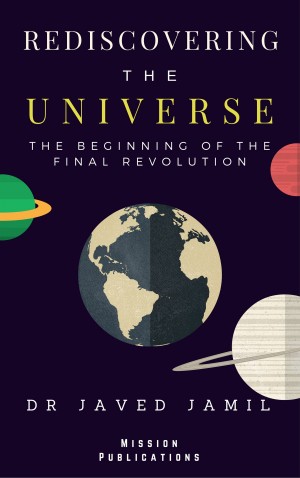 Rediscovering the Universe : The beginning of the Final Revolution : Universal Theory of Relativity

The Universal Theory of Relativity presented in this book will be a reminder to the world that there is still a vast scope for novel philosophical ideas in the field of the knowledge of the Universe: Ideas that can remarkably transform our view of the Universe. I do not claim the theory itself is the Final Revolution, but I am supremely confident this will herald what, I hope, will be the final phase of the understanding of the universe. This will ultimately lead to a genuinely decent understanding of the universe--the way it came into existence; the way it functions; and the way it would continue its future journey to its ultimate destination. I do hope the book proves not to be a shot in the dark but a shot in the arm for the development of our knowledge of the world we live in.

Though the book critically analyses Einstein’s philosophical ideas in the development of the modern theory of Physics, this has not stopped me from dedicating the book to the great genius. This is my tribute to his immense contribution to knowledge. Theories come and go but the work of those who labour, day and night, to bring forward these theories in their quest for knowledge must always be admired. Einstein was instrumental in giving a philosophical twist to an otherwise dry subject like Physics. The need of the time is to keep thinking, presenting new ideas and trying to come to the best possible conclusions. I am also dedicating the book to another great name in the modern Physics, David Bohm, for whom I have developed a very special respect for reasons that will be obvious to readers only when they have finished this book. The readers must not however presume that the book supports the idea of the phantasmic world, mooted by Bohm.

Readers may notice some reluctance in the initial part of the development of the new theory, named as Universal Theory of Relativity and a steadily growing confidence in the treatment, as the book progresses. This reflects the reluctance I had when I began to formulate my ideas in the form of a theory and subsequent elevation of the level of my confidence, which reached sky high by the time the work finished. One thing is sure though. The universe the way the readers view it before they start reading the book will appear to have undergone a massive transformation by the time they reach its concluding part. From a universe that looks at best a functionless receptacle of numerous functioning constituents, which have hardly any means of fast enough communication between them, it will have become a much more organised, well-connected, state-like system. The universe, as a result, will certainly emerge as much lovelier and livelier than what the modern physicists have shown us so far.

I had published the preliminary ideas of the Universal Theory of Relativity about six years ago in a booklet, entitled, “Beyond Einsteinian Limits”. But that was only an initial attempt to put some ideas on record. These ideas had not been corroborated in the way they deserved. The present work will surely go a long way in that direction.
Download: epub mobi (Kindle) pdf more Online Reader
lrf pdb txt
Price: Free! USD
Add to Library
Create Widget
Tags: universe theory universal relativity rediscovering jamil javed
About Javed Jamil

After I wrote my review I had some further thoughts on the model of the universe in this book, the most important being that the model he proposes cannot be right.

He postulates that the red shifts we see are due to the rotation of stars around us in a fixed-size spherical universe. However, we do NOT see blue-shifted galaxies (that is, galaxies that would be approaching us). In fact, his model would only work if we were at the exact center of the spherical universe. The closer we were to the edge, the more we should see blue shifts occurring. Since there are none, I conclude that the conventional model is right -- that all galaxies in the universe are flying apart from each other, and thus have red shifts.

From the first time I began to read in-depth about Quantum Mechanics, I had a problem with it. I'm no mathematician, but it doesn't take one to see how fragile that house of quantum cards can appear when you study its foundation. Scientists predict particles and, voila! they suddenly appear exactly as predicted. And then you have fudge factors, like Heisenburg's Uncertainty Principle, and Einstein's limit of the speed of light, which obviously is violated by the interactions of certain particles, and requires the concepts of "infinite mass" and "singularities." Although the author praises Albert Einstein, and says his contributions to science are beyond price, he states, "...in the wake of Einstein's general theory of relativity, the universe has become full of infinities." He goes on to say that "Even in Quantum theory of Gravity, attempts to remove singularities have not been convincingly successful...The Uncertainty Principle has, in fact, created another tedious situation." And in regard to what he calls the dubious mathematical method of renormalisation, "[It] involves cancelling of infinities by introducing other infinities."

Javed Jamil asks a lot of questions in his book that seem to impact directly on the fragility of the quantum concept, such as "How does gravity propagate and influence the whole universe?" "Why did the universe begin at Singularity?" and "What caused the Big Bang?" But he goes much further, and challenges some of the established concepts while proposing proof for a Unified Theory of Relativity.

He questions also the concept of how the universe expanded after it was born. He says, "It is ironical to believe that present laws were derived from a situation where these laws had no tangible or perceptible existence," and he speaks of the Horizon Paradox, puzzled at how the universe experienced such huge transformations within the first second, when it had already expanded so far that the transformations had to occur faster than the speed of light. It seems odd, too, that the speed of light is so minuscule in comparison to the apparent size of the universe. Javed Jamil makes the case that his Universal Theory of Relativity would solve many, if not all, of these problems, and proposes that the universe is rotating, not expanding. He adds that the UTR talks of the birth and death of the universe as a whole (not expanding into nothingness, not contracting into a singularity), with various stages in between.

The book does have its problems. The author's theory requires some input of energy from outside the universe, and he eventually states that the source of this energy can be none other than God. However, although he continues to hold this as fact through to the end of the book, he provides no evidence for it. Whatever your believe is about God, or the lack thereof, the case is not made in this book that any source of energy from outside the universe must be a God or gods. That doesn't spoil the other revelations proposed within the book itself.

The book provides a good ground for current theory, and the author's skepticism and counter proposals made me think, and thinking is always good. As I stated at the outset, I'm no mathematician. Neither am I a physicist. I can't say unequivocally that everything presented in this book is valid; I can say only that the part covered by my own meager knowledge seems accurate. I downloaded this book for free from Smashwords; however, the Kindle edition is available at Amazon for 99 cents. In spite of its not actually making the case for the author's most ambitious concept, I found the book fascinating because of its thought-provoking theories and ideas, and that, all by itself, deserves a solid 5 rating out of 5 stars.

(review of free book)
Robert Benson reviewed on July 31, 2016
(no rating)
This book presents a fascinating vision of an alternative to Einstein's General Theory of Relativity (GTR). It is not terribly difficult to read, although it does not explain his theory in an especially cogent way. In defense, there are a lot of different aspects and implications, and he discusses many of them.

One especially beneficial aspect of this book is his discussion of failures and inadequacies of GTR explanations, and shows how his Universal Theory of Relativity better explains those issues. This is actually very powerfully suggestive of the value of the theory.

One minor shortcoming of the book is that it is about 10 years out of date on experimental data references. This is not a critical shortcoming, but it would be better if more current references were included.

The book does not contain any specific empirical evidence proving his thesis that the universe is rotating at a very high speed (higher than speed of light speed). However, being able to empirically find two sections of the celestial sphere which are diametrically opposite on the sphere and have noticeably lower red shifts in the most distant objects would go a long way to validating his theory.

I'm giving this a 5 star because of the subject matter and the fact that it is written for the non-mathematicians and non-physicists out there.