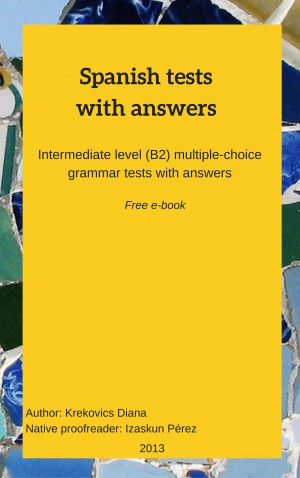 By Diana Krekovics
Intermediate level (B2) multiple-choice grammar tests with answers More
This free e-book contains 5 Spanish intermediate (level B2) multiple-choice grammar tests.
Every test contains 50 sentences. The tests are followed by tables containing the right answers.
+1: there is one more test made of 25 sentences with not only the right answers but the explanations, too!
This is a free sample to the book Spanish Grammar Practice containing 15 tests (750 sentences) all with answers and explanations.
Download: epub mobi (Kindle) pdf
Price: Free! USD
Add to Library
Create Widget
Tags: spanish spanish grammar spanish as a second language spanish language spanish as a foreign language spanish learning spanish free spanish freebies spanish grammatical spanish as foreign language
About Diana Krekovics

I have been teaching private students since 2008. From 2004 since 2008 I worked for a publishing house in Hungary where I collaborated in the making of various Spanish dictionaries as a lexicographer and later co-editor. In 2008-2010 I worked as a Spanish teacher at the University of Szeged (Hungary) teaching Spanish Language, Translation and Linguistics. Since 2010 I have been working as a freelance Spanish Teacher mostly with private students, but I occasionally teach at language schools, too.
I'm also an Applied Linguistics PhD student specialised in Second/Foreign Language Teaching.
I acquired a DELE Superior Spanish language certificate in 2004 with a 90% score. I lived in Spain for a year as an EVS volunteer in Barcelona and as a student in Jaén.

You have subscribed to alerts for Diana Krekovics.

You have been added to Diana Krekovics's favorite list.

You can also sign-up to receive email notifications whenever Diana Krekovics releases a new book.