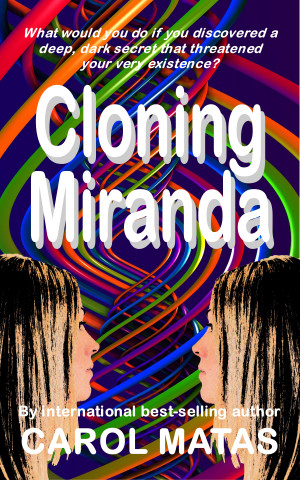 A new updated edition that combines Canadian bestseller, Cloning Miranda, with its two sequels, The Second Clone and The Dark Clone into a single gripping adventure.

Fourteen-year-old Miranda has it all: beauty, brains, talent, perfect health. Until the day her vision goes blurry – the first symptom of a fatal disease. As she and her parents fight to save her, she makes the shocking discovery that everything she thought she knew about her life is a lie.

An internationally best-selling author of over 45 books for children and young adults, Carol Matas writes in all genres, from historical fiction to fantasy, science fiction to contemporary.

Carol’s books have been published all over the world in more than fifteen languages, garnering over a hundred awards and nominations. Tucson Jo, an historical novel for middle grades set in the Wild West, was a 2014 National Jewish Book Awards Finalist. Her other awards include a 2014 Sydney Taylor Honor Book Selection, a 2014 Canadian Jewish Book Award, the inaugural Silver Birch Award, the Geoffrey Bilsen Award for Historical Fiction for Young Readers, a New York Times Notable Book Award, as well as two nominations for Canada's prestigious Governor General’s Award.

Carol lives in Winnipeg, Canada, with her husband Per K. Brask, a translator, poet and author.

You have subscribed to alerts for Carol Matas.

You have been added to Carol Matas's favorite list.

You can also sign-up to receive email notifications whenever Carol Matas releases a new book.