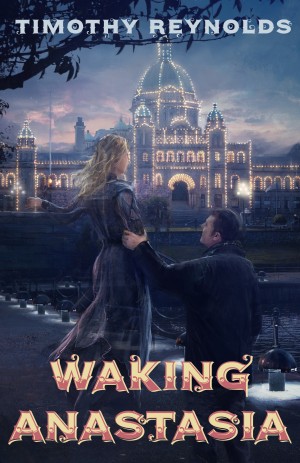 When Jerry Powell inherits a torn, bloodstained book of poetry he has no idea that it contains the soul of Anastasia Romanova; but when he accidentally awakens her ghost, he discovers that death hasn’t dulled her sense of mischief and joy for life.

Between driving across the continent to start a new job in a new city, fending off a shady Russian antiquities collector, and ignoring his worsening migraines, Jerry doesn’t have time to cope with his undead royal houseguest.

Unfortunately for him, time isn’t on Jerry’s side.

Tim Reynolds is a Canadian twistorian, bending and twisting history into fictional shapes for sheer entertainment. His humorous non-fiction column in SEARCH Magazine is just as entertaining, but is based strictly on his bizarre, event-filled life.

His latest novel is "Waking Anastasia" from Tyche Books. It's a tale of death, laughter, and love...in that order, made the Long List for the Edmonton Public Library's Alberta Readers' Choice Award, was selected by Kobo for the 2018 Royal Wedding Weekend Promotion, and reached Number 1 on the Calgary Herald's Local Bestseller's List in July 2018.

His debut novel, the urban fantasy, "The Broken Shield", was released on July 21, 2014 on Amazon as a digital book and has reached as high as #10 in Contemporary Fantasy on Amazon.ca. It became a available in print in early 2015. The Second Edition is now available.

His published short stories can be found gathered together in "The Death of God and Other Stories", and range from lighthearted fantasy to turn-on-the-damned-lights-now horror, and include the story of a bus driver who kills all his passengers, Evil fashion advice, a tale of a dying folk singer's moments teaching Death a love song, and a dark, depressing view of the near future of reality TV and child-rearing.

His 100-word story “Temper Temper” was a winner of Kobo Writing Life’s Jeffrey Archer Short Story Challenge, and his short story "Tamarack and the Stone" was a finalist for the 2016 Baen Fantasy Adventure Award, received an Honourable Mention in L. Ron Hubbard's Writers of the Future Contest, and is a featured story in issue #108 of On Spec Magazine. A full-length novel has begun based on the short story.

Based in Calgary, Alberta, Tim grew up in Toronto, Ontario, and lived high up in the Canadian Rockies for eight years at Fairmont Chateau Lake Louise.

He is currently working on a mystery series set in Seattle, and a rom-com set in Toronto.

You have subscribed to alerts for Timothy Reynolds.

You have been added to Timothy Reynolds's favorite list.

You can also sign-up to receive email notifications whenever Timothy Reynolds releases a new book.