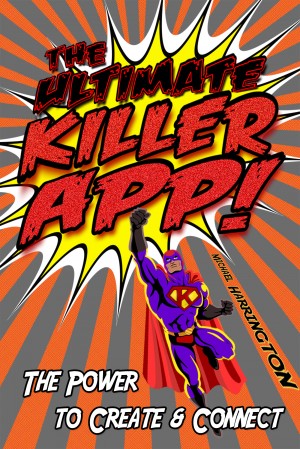 The Ultimate Killer App: The Power to Create and Connect

By Michael Harrington
Creativity and social connection enhance our ability to survive and thrive biologically and emotionally as they help us build the relationships we crave as social beings. Creativity and sharing lead to greater happiness, satisfaction, meaning, and healthy well-being. Together, the synergy and positive feedback they create forms the basis of Ultimate Killer Apps. More
The Ultimate Killer App!
The term “killer app” is so ubiquitous in technology circles as to become a cliché. It now represents the Holy Grail of tech entrepreneurs and venture capitalists. But a killer application broadly understood goes far beyond the narrow definitions of smart phone mobile apps. Ultimate killer apps (UKAs) are technologies that change our world and the ways we relate to it. In other words, they change our lives in profound ways. (In so doing, they may or may not generate boat-loads of cash.)
The question is: how do they do that?
UKAs do so by serving our basic human needs, offering strategies to enhance our survival and our search for meaning. They enhance our survival in many ways, with material benefits that build economic security and promote communal solidarity while helping us become more efficient and effective in securing our basic needs. They provide psychological and emotional rewards by empowering us to create and to share our creations. Creativity and social connectedness have been shown to enhance our health, happiness, well-being, and life satisfaction.
History offers quite a few cases of UKAs that illustrate these unique qualities. One of the more significant is fire, which allowed primitive communities to survive extreme climates and expand their diets, nurturing the culinary arts. But gathering around the fire also promoted communal rituals that fostered the creation and sharing of music, dance, and storytelling.
We can fast-forward a few thousand years and consider another ubiquitous UKA that probably escaped our notice: the humble pencil. With sheer simplicity and economy, the pencil facilitates the recording and sharing of ideas, thereby promoting their creation. One needs only a ten-cent pencil and a writing surface to share the wealth of human knowledge and creativity.
In this same way, we see how and why digital media and microchip technology has radically transformed our world: its economics, its global connectedness, and its proliferation of information. The Information Age has dictated that “information wants to be free.” Essentially, it’s true. For instance, take this blurb you’re reading to promote this short eBook. I’ll give you the basic ideas contained in this eBook for FREE and you can save less than the price of a Starbuck’s coffee. (Actually, we’ve both probably paid someone else for access to this World Wide Web through which we are communicating.)
So, let me repeat in a nutshell: The Ultimate Killer App empowers our human desire and need to CREATE and to SHARE our creations in order to socially CONNECT. That’s it, create, share, connect. If that’s all you needed to know, I’ve saved you $3. If your curiosity is piqued, you can read my author’s blog and get the full story piece-meal over the next few months. Or, you can save yourself time and energy by paying the $3 and satisfy your curiosity immediately with the complete details. You see, the ideas are free; the packaging, time, and search savings are the value you may want to pay for. It’s your time, but trust me, it’s a better pay-off than a cappuccino.
Read on and find out how creating and sharing provide the foundation for our economy, our educational system, our cultural evolution, and our civilization. This little book is about more than killer apps, it’s about life itself.
One final teaser. At the origin of life, nature developed THE ultimate killer app: S-E-X.
(I deliberately capitalized that to seize your attention. Download for more cheap titillation.)
Available ebook formats: epub mobi pdf lrf pdb txt html
First 10% Sample: epub mobi (Kindle) lrf more Online Reader
pdb
Price: $2.99 USD
Buy Add to Library Give as a Gift
How gifting works
Create Widget
Tags: social networking creativity art creative learning instruction ideas self improvement inspiration app development music and brain psychology of happiness art and science technology and innovation
About Michael Harrington

Michael Harrington has a wide-ranging background in the social sciences and the arts. He has earned advanced degrees in economics, finance and political science and has worked in the securities and venture capital industries as an investment portfolio manager and financial analyst. In more recent years he has taught political science as a lecturer at the University of California and worked as a research fellow and public policy analyst, conducting studies for several policy thinktanks.

His writings and research on political and economic issues have won several national awards and his opinions and letters have been published in a wide variety of national media journals, including The Wall Street Journal, The Economist, BusinessWeek, the Financial Times, and the Los Angeles Times, among others.

On the artistic side his interests encompass music composition and performance, photography, and writing. He has composed music, written a play, taught music and designed websites for his photography and fiction writing. He enjoys a life-long fascination with the Italian Renaissance, its art, culture, and politics. He has lived and studied near Florence, e lui parla italiano abbastanza bene. His encompassing interests in society and creativity directed him toward this fascinating story of Savonarola and Machiavelli, a story that strongly resonates with the modern world.

You have subscribed to alerts for Michael Harrington.

You have been added to Michael Harrington's favorite list.

You can also sign-up to receive email notifications whenever Michael Harrington releases a new book.