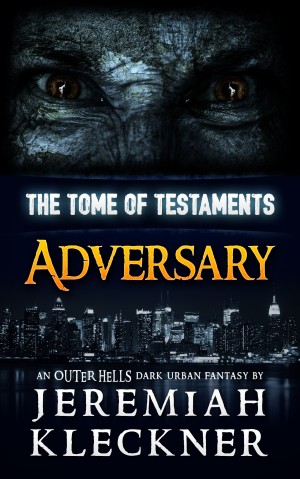 On the dark streets of Jersey City and Hoboken, Damon Nero fights to bring his goddess back from her exile in the OUTER HELLS. While hunters and cultists attempt to keep him from his beloved, Damon pushes forward, ignoring pain and the threat of death to achieve his ends.

But as he puts the final pieces into play, Damon finds himself caught in a dangerous game that he does not yet understand. Threatened by an old and familiar ADVERSARY, he begins to realize that this is only the beginning.
Download: epub mobi (Kindle) pdf more Online Reader
lrf pdb txt
Price: Free! USD
Add to Library
Create Widget
Tags: supernatural lovecraft buffy cthulhu fringe
About Jeremiah Kleckner

Author Jeremiah Kleckner has taught English/Language Arts in Perth Amboy since 2005. During that time, he earned the Samuel E. Shull Middle School’s 2014/2015 Teacher of the Year award and published several books. His highly-successful dark fantasy prequel, CAPTAIN JAMES HOOK AND THE CURSE OF PETER PAN, was co-written in 2012 with his longtime friend Jeremy Marshall and is available in digital, print, and audio formats. That book's sequel, CAPTAIN JAMES HOOK AND THE SIEGE OF NEVERLAND, was published two years later in 2014. The third book in the trilogy is slated for release in 2018. Jeremiah’s ongoing TOME OF TESTAMENTS series, starting with ADVERSARY, BEAST, and CREATURE, is a Lovecraftian dark urban cult fantasy set in modern-day Jersey City and Hoboken. FORCE, a superhero fantasy, and WATCHING FROM BEHIND GLASS EYES, a collection of short horror stories featuring a possessed doll, are available for free online if you want to give his writing a test drive. Jeremiah lives and laughs in Jersey City with his wife, daughter, two dogs, and one cat. Keep up with Jeremiah’s many events and projects at his website JeremiahKleckner.com or contact him on Facebook @AuthorJeremiahKleckner and on Twitter @J_Kleckner for a quick response.

You have subscribed to alerts for Jeremiah Kleckner.

You have been added to Jeremiah Kleckner's favorite list.

You can also sign-up to receive email notifications whenever Jeremiah Kleckner releases a new book.