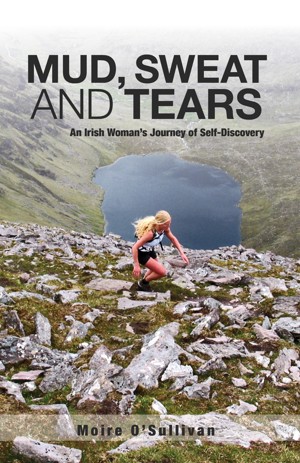 Mud, Sweat and Tears - an Irish Woman’s Journey of Self-Discovery

By Moire O'Sullivan
Rated 5.00/5 based on 3 reviews
In July 2008, Moire O'Sullivan made a solo attempt of the Wicklow Round, a gruelling run spanning 100 kilometres over 26 of Ireland’s remotest mountains.

Mud, Sweat and Tears tells one woman’s story about her passion for mountain running, a passion that has brought her to the heights of some of Ireland’s most impressive mountains and to the depths of her own human limitations. More
Moire turned up to her first mountain race with the wrong shoes, wearing too many clothes, and with a body verging on obese. Though tempted to pull out and go home, she reluctantly runs.

Little did she know the race up Corrig Mountain would inflict such physical blows: Her lungs catch fire, her legs explode, her heart hits record speeds. And though it’s a gentle summer’s evening back in Dublin, on top of Corrig Mountain the wind screeches and the mist swirls as she lurches and lunges over grass, rocks, and rutted bog.

The next morning, everything hurts. But still she perseveres. Every week, she’s battling it out with the other mountain runners, adversaries on the hill. But by 9 pm, she’s joining her new found friends in the pub, discovering the wonderful healing powers of a proper pint.

Over the next three years, Moire competes in every mountain race she can find, whatever its shape or form: everything from ten kilometre sprints up summits, to one hundred kilometre runs requiring map and compass. She even dabbles in adventure racing, doing multi-day multi-sport races in teams of four in the barren wastelands of Ireland and Scotland. But it is not until she sets her sights on the still unconquered Wicklow Round that she finally finds her nemesis.

In July 2008, Moire made a solo attempt on the Wicklow Round, a gruelling endurance run spanning a hundred kilometres over twenty six of Ireland’s remotest mountain peaks. After twenty one and a half hours she collapsed, two summits from the end. Battered and bruised yet undeterred, she returned a year later to become the first person ever to complete the challenge.

In 2009, she became the first person to complete Ireland's Wicklow Round. She subsequently wrote the inspirational mountain-running book, Mud, Sweat and Tears.

In between having her children, Moire won Ireland's National Adventure Racing Series in 2014, 2016 and 2017, a story captured in the book Bump, Bike and Baby.

Moire previously worked for international aid agencies throughout Africa and South-East Asia. During a stint in Vietnam, she welcomed into her home a dog named Tom, the subject of her latest book, The Hound from Hanoi.

Moire now lives in Rostrevor, Northern Ireland, at the foot of the Mourne Mountains.

Reviews of Mud, Sweat and Tears - an Irish Woman’s Journey of Self-Discovery by Moire O'Sullivan

I can only echo the previous reviews. Moire's journey should be a lesson to all. Nothing is out of reach if you knuckle down and apply yourself. The joy of hill running comes through loud and clear and on reading it one would want to throw on the running gear and get out there. Highly recommended, the book and the sport.

This is a must read for any hill runner/adventure sport enthusiast. To read a first hand account of her journey from complete novice Leinster Leaguer to one of mountain running and orienteering's finest athletes is truly eye opening. If you're lucky, many of her experiences in the book will seem familiar to you. If not, you'll gain the inspiration to go rectify that situation ;-) I don't think I've ever seen the highs, lows, freedoms, disappointments and exhilirating surprises of long distance navigational events described so eloquently.

(reviewed the day of purchase)
Pete Power reviewed on June 8, 2011

This is one of the best books I have read in a long time. A truely inspirational story of mountain running and extreme adventure. I was riveted by the challenge the author set for herself and her 2 year committment to achieving her goal. Something every athlete and adventurer should read before they die.

You have subscribed to alerts for Moire O&#039;Sullivan.

You have been added to Moire O&#039;Sullivan's favorite list.

You can also sign-up to receive email notifications whenever Moire O&#039;Sullivan releases a new book.