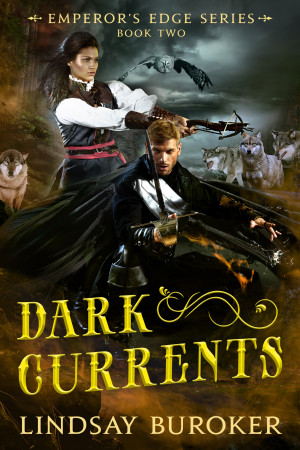 By Lindsay Buroker
Rated 4.60/5 based on 15 reviews
It’s been three months since Amaranthe and Sicarius thwarted kidnappers and saved the emperor’s life. The problem? Nobody knows they were responsible for this good deed. Worse, they’re being blamed for the entire scheme. With enforcers and bounty hunters stalking them, and the emperor nursing a personal hatred for Sicarius, it’s going to be hard to earn exoneration....

105,000 words. More
It’s been three months since former enforcer Amaranthe Lokdon and the notorious assassin Sicarius thwarted kidnappers and saved the emperor’s life. The problem? Nobody knows they were responsible for this good deed. Worse, they’re being blamed for the entire scheme. With enforcers and bounty hunters stalking them, and the emperor nursing a personal hatred for Sicarius, it’s going to be hard to earn exoneration.

When Amaranthe’s team discovers mutilated bodies in the city aqueducts and a mysterious illness incapacitates thousands of citizens, she and Sicarius see an opportunity to solve the mystery and prove their loyalty. But they’ll have to defeat vengeful shamans, man-eating predators, and deadly mechanical constructs, all while dodging imperial soldiers who would rather kill them than accept their help.

Nobody said exoneration would be easy.

I enjoyed this book as much as the first one in the series (please see my comments on that book, because they apply to this book, as well). I have already bought the next book in the series, and I'm looking forward to reading it.

Really enjoyed it, I read this genre because I like to escape and this series of books certainly allows that!!

Bodies found in the aqueducts and a mysterious illness taking hold of the city. Are the incidents related? Is this the mystery to solve that will exonerate a motley bunch of outlaws - and will they survive the attempt?

"Dark Currents" is the second book in the Emperor's Edge series by Lindsay Buroker. I felt that the first novel read very much the opening movie-length episode of a steampunk television series which I had affectionately nicknamed The "A-Team of Steam". Nothing has changed with the second episode. This is pretty much how I'd imagine a second episode of a TV series would play out. The story arc not much progressed, a bit more of a spotlight on one of the main characters and a convenient mystery popping up to help things get off the ground.

Amaranthe is an ex-enforcer finding herself on the other side of the law and leads the team. She continues the ever so important romantic interest with the shady assassin, Sicarius. There is quite a bit of focus on the relationship of these two during the novel, but not without turning the spotlight on the rest of the team. Episode two is our chance as readers to become more acquainted with Books. We find Books feeling like he doesn't fit in with the rest of the group and there's plenty of opportunity for us to examine his feelings, follow his love interest sub-plot and to revel in his inevitable feelings of belonging and greater self-respect by the end of the story. We also get to see him relating to the other team members. In fact, the interplay between the characters takes such a significant portion of the story that as a consequence, the plot itself didn't impress overly much. It really felt like a stand-in story making room for more getting-to-know-you.

Firstly, the mystery itself just wasn't that interesting. One might expect in a book like this that small events lead to an epic conspiracy. Not so here. The conspiracy is almost smaller than the discoveries of mutilated corpses floating around in the aqueducts under the city at the start of the story. The novel felt like a 300+ page side quest not much elevated beyond killing the rats in the inn-keeper's cellar. The action scenes were not very well executed and the author even took what I consider the easy way out by rendering characters unconscious to skip chunks of action. In particular, there is a scene at a dam in the latter half of the book in which unconsciousness seemed to be used as a device to avoid what appeared to be a rather ludicrous finale to a crisis.

While the characterisations were indeed the highlight, I also felt that all the characters including the grim and very serious Sicarius were decidedly camp. Every conversation could be considered witty banter, the barbs flying even in the middle of a crisis. While I think this would probably work quite well in television, I started to find it tiresome by the second half of the book. Perhaps every piece of dialogue doesn't need to have a joke in it. Perhaps Sicarius doesn't need to arch his eyebrow constantly like a villain in a Mel Brooks movie.

I think, for me, what worked in the first novel, didn't work in the second. The prose itself was very good, but it just wasn't enough of a counter-balance for the content. If this were television, I'd probably watch the next episode where the tom-foolery might remain charming and the lack of progress on the main storyline would be expected. However, I'm not so sure when I'll get around to reading the next book in the series. I think the series definitely has a market, but I'm beginning to think that the target audience doesn't really include me.

Good sequel. Deepens the characterisation of the charachters, especially Books, but some of the others too. the author says, in the afterword, that she's going to devote each book mainly to one character. This was Books'. But a lot of Amaranthe and a fair amount of Basilard is in this book also. I have to say that I did predict the major plot twists in this one, unlike the first. But it was a good read for all that. I'll be buying the third (which has Basilard as the main focus.)

Gosh, I love these characters!
May your muse keep providing you with story ideas for them!
I'm looking forward to read the next book of the series.

A great sequel to The Emperor's Edge. I enjoyed it even more than the original. There's lots of action, some new monsters, character development, and Books gets to be the hero.

Really enjoyed this and all the other books featuring these characters. Am waiting impatiently for book 4.

Can't say any more than what's already been written in other reviews, and what I said about book 1. Loved it. Look forward to book 4 (having already read the first three, the short story collection, and Encrypted, which cleverly links in with The Emperor's Edge series by introducing us to Sicarius just starting out on his "assasinly" career - to use an Amarinthism!)

Finally, the sequel to 'Emperor's Edge'! And this one is as good as, if not better, than the first. Amaranthe and her gang have stumbled upon a new dilemma facing the empire: someone is poisoning the city's water supply. Of course, Amaranthe and her team don't hesitate to take up the challenge, and naturally, mayhem and adventure ensue.
I'll not go into detail (that would spoil the story), but if you've read any of Buroker's other books, you will not be disappointed with this one. Okay, you might be disappointed that it ends and there isn't a third book ready and waiting in the wings . . .

In this installment, we get to spend a little more time with Books and get to see his perspective on being a member of this unlikely group. Maldynado is as ridiculous and charming as ever (making me laugh out loud on several occasions). Akstyr and Basilard help glue the team together with Akstyr's typical teen surliness and Basilard's calm support (though I do hope to learn more about them in future books). As for Sicarius, we finally get to learn some more of his secrets, and he even learns to tease Amaranthe, in a very Sicarius-like way of course.

All in all, another chapter in a story I can't get enough of. The character driven plot is well developed, the dialogue witty and engaging, and the action and adventure is non-stop. Eagerly awaiting what Miss Buroker has planned next; hopefully I won't have to wait too long!