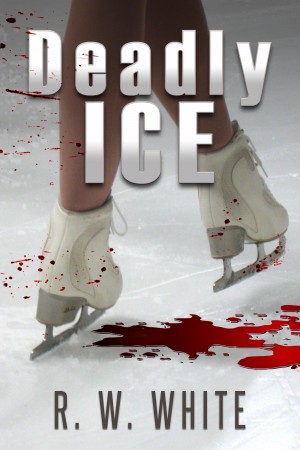 By R.W. White
Elizabeth is an American figure skater training at England’s prestigious Ice Academy in London, accompanied by her abusive mother, Leah. Amateur sleuth, Ben Hamilton and his daughter, Sarah, also a figure skater, befriend Elizabeth. When the translucent ice surface is turned blood red, the Hamilton’s are left to resolve and manage the dilemma between an accidental and intentional death. More
American teenager and competitive figure skater, Elizabeth Silverman, is steered by her assertive mother, Leah, into the prestigious British Ice Skating Academy in London. Under the pretext of being in England on a tourist visa her father, Murray, sets about to establish a London office for his unconventional business of making diamonds out of cremated remains. Leah Silverman’s abusive determination to force her daughter to excel as a figure skater turns out poorly. Amateur sleuth Ben Hamilton and his teenage daughter, Sarah, attempt to befriend Elizabeth. In a fit of rage, Mrs. Silverman rashly steps onto the slippery surface in an attempt to pull her daughter off the ice. She falls, splits her head open and dies in Ben’s arms as he attempts to administer first aid. The police consider it and open-and-shut case of accidental death, but Ben is unsure. A friend, in MI-5, helps him discover that Elizabeth has concocted a garden variety drug which may have contributed to her mother’s accident. With the Hamilton’s support and encouragement, Elizabeth confesses to her father, who is then faced with his own complicity in and for his wife’s behavior. Ben and Francesca are left to resolve and manage the dilemma of Leah Silverman’s death, between accident and intent.
Available ebook formats: epub mobi pdf lrf pdb txt html
First 20% Sample: epub mobi (Kindle) lrf more Online Reader
pdb
Price: $1.99 USD
Buy Add to Library Give as a Gift
How gifting works
Create Widget
Tags: england london sub rosa teenage girls figure skating belladonna cremated remains skating academy synthetic diamonds
About R.W. White

About the Series: Ben and Francesca Adventures

Ben and Francesca Hamilton unwittingly become covert agents for the British Foreign Office while on their honeymoon in Abetifi, the highest habitable village in West Africa, and are thrust into a terrifying adventure of life-threatening twists and turns while discovering a ‘Fountain of Youth’ drug. Three years later, while on their first family honeymoon with two-year-old Sarah and much to Francesca’s objections, Ben becomes involved in multiple murder investigations. Francesca is mugged while protecting Sarah and Ben comes to believe he is the murderer of Francesca’s assailant. Together they are able to help a wily detective solve the murders and associated crimes before returning home to London, and looking forward to the day when they will be able to have a peaceful, non-adventurous, holiday. Third in the trilogy due later this year.