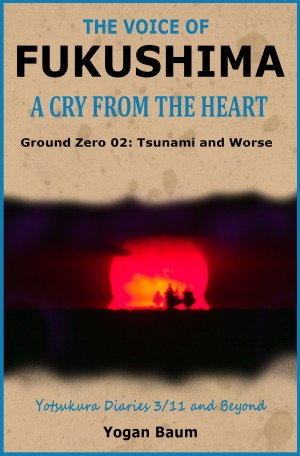 The Voice of Fukushima: A Cry from the Heart - Ground Zero 02: Tsunami and Worse

Early next morning the north-flying Chinooks overhead tell their own story. By nine o’clock, reunited to his wife, the flight from Fukushima is on. Japan is on the brink and the whole world is watching Fukushima Dai-ichi.

An odyssey of three days on the road which leads to various insights but no conclusion is salvaged by an angry voice. And soon two out of two hundred on flight ANA 1516 see the overcrowded but otherwise desolate Fukushima Airport fall back below them like the smoldering deck of a doomed aircraft carrier while snacks are already being served.

“What brought you here?” is a question Yogan Baum was asked hundreds of times over the years. “Well”, he used to say, “the train, mainly”: which is not untrue. After a weeklong ride on the famed Moscow Peking Express of 1984 he rolled through China some more, went up in the air for the second time in his life, reached Hong Kong and took to the air again. He saw Philippine palm trees out of an oval window and there he was in Japan. The immigration officer looked into his wallet, then at his naivity, in despair and stamped his passport: “Welcome to Japan!”

The friendly Narita information girl, “moshi moshi”, charmed him and the green scented tatami in his hotel room made him feel at home instantly. He had arrived.

What made Yogan leave his own country, then? Was it a love of travelling? When he was a child he spent many happy hours exploring maps. He loved the deep brown highlands of South America and, before all else, Tibet. Not Japan. Later on India was his dream destination – something made him veer off course and so he did not reach Bombay but Iwaki, Japan, instead. Was it Tony Scott and Hozan Yamamoto’s “Music for Zen Meditation and Other Joys” that hooked him? The magic of the Shakuhachi he could not resist. It conjured up pictures of a rural hillside in autumn, of wind rustling in leaves and mist rising from the valley. Yogan felt at peace. He felt at ease in the eerily spine chilling strains of these strange sounds.

Did he find that hillside, then? That peace? As for that hillside, Yogan hasn´t found it yet. Could it be his present state of being in limbo, between loss and hope, will lead him towards the light he once had a glimpse of, in a lost world far, far west of here?

Not a hillside in autumn – a family was what he found in Japan! A wife. Children. A whole, new, unexpected, wonderful life! He worked hard and learned to be a husband and a father. Their life in the small fishing port of Yotsukura, Iwaki City, was as happy as could be. People were good to them, and they tried their best to be responsible. All foreigners are outsiders, yes, but being on the outside of things has its advantages, too. Opening his soul to the near vastness of the Pacific Ocean and the night stars high above gave him space to breathe: there was nothing much he missed.

Life changed dramatically on and after March 11, 2011. They were spared in many ways: the megaquake did not break them, the killer tsunami stopped short of their street, and the triple meltdown of the ruined Dai-ichi nuclear power plant 20 miles north of here miraculously came to a halt somewhere below the crippled plant. Thanks, mainly, to the courage of a man called Kan. Where and in what state it is, and how to deal with it, is absolutely unresolved. It is the black heart of Fukushima.

Life changed all the more as it went on as if nothing had happened. This, the second catastrophe, is the real one, Yogan now thinks. Japan was spared and squandered its chance to rise out of the ashes. The old guard was too strong. Japan suffers and there is no end in sight. It could have contributed to a better world. It didn’t. Fukushima’s tears could have watered the seeds of a better future. Japan was not allowed to. This is bitter.

Yogan tells the sad story of defeat as it unfolds in one man’s, one family’s struggle. He tells it to honor those who suffer in silence. The old. The children. The uninformed. The victims.

He does not claim to be uninvolved in his report on life twenty miles from ground zero. “Ground Zero” it is, how ever often one will hear that “it was just an accident”. That is a lie nobody should accept. Yogan does claim to be completely honest in showing, how human hubris, as exemplified in the recently exploded dream of “unlimited energy, for free!”, blighted all existence so close to the shore.

Life is precious. It is fragile. We have to treasure it if we want to survive. “Life is an ocean”, a song says, “but it ends”, too. We are stewards, not kings.

About the Series: The Voice of Fukushima: A Cry from the Heart

“A Cry From The Heart” is what the author needs to share with all of you who care about the future. Wake up! he says, Fukushima is only the tip of the iceberg.

Yogan Baum, no longer a stranger in his adopted country, lived through the catastrophic events of March 11, 2011. The place is Yotsukura, twenty miles from the terminally ruined Dai-ichi nuclear power plant.

Having set the stage in loving detail Yogan relives the traumatic experience of earthquake, tsunami and Fukushima meltdown that shook and shattered his world.

A dense fabric of memories and reflections is woven across steel bars in trying to heal a trauma. Read and learn about how Yogan struggles in the face of the big, fat lie they call “FUKUSHIMA”. A self perpetuating lie spawned by the industrial-political complex and made viable by the complacent media of this beautiful, suffering country that deserves so much better.

9 years after 3/11 Fukushima is a festering wound everybody wants to forget about. People live their lives in the shadow of a ruined dream: Yogan Baum is one of them. He suffers but fights, tries to get down to the truth as he keeps track of the years after THAT DAY.

Also in Series: The Voice of Fukushima: A Cry from the Heart

The Voice of Fukushima: A Cry from the Heart - Ground Zero 02: Tsunami and Worse.
by Yogan Baum.

The first (and free) book of this trilogy looks back on the authors travels and settlement in Japan. He married and joined that hive of activity. But like a hive, it has an over-all tranquility. And the landscape of the authors past is one of peaceful remembrance.
Until the mega-quake, when even the framework of that landscape is shaken.
After a lively button-holing preface, we are back to the day the earth stood still – not! This beginning is the part of the book, like some Robinson Crusoe, I most identify with. Because the dislocation is not only of land and sea but of man from society, which remains more an English than a Japanese condition.
The author puts it down to a general state of shock, which he was not aware of, at the time. The numbness wears off and my English stand-offishness envies the reassertion of social cohesion between extended family and friends.

Above all, this is a human story, peppered with witty associations and rambling but compulsive asides, written as fluidly as a fugue, of the flight of the author and his wife from Fukushima, even as three reactor housings explode, one after the other.
I didn’t know what that was about, till the author explained each of them.

Outrageous, how blandly the British media covered them. The Guardian news-paper received leaked emails from the Energy Department, to nip in the bud, bad publicity from the Japanese nuclear disaster.
I read a Guardian Comment Is Free conversation, part of which went something like this: Yes, the BBC was definitely on message. After a power-plant explosion, a studio comment went: Oh that’s all right then.
Adolf Hitler said: If you tell a lie, make it a big one. Richard Feynman said: Reality cannot be fooled. Days after Fukushima nuclear under-went explosive destruction, when they could not possibly know, journalists, right and left, in a hysterical defiance of reality having made fools of them, proclaimed that Fukushima proved that nuclear is safe.

This second account, in the trilogy, is not a catalog of catastrophes from the tsunami. We are not reminded, in much detail, of the reducing of towns to trash heaps, as if the ocean had fallen into the mental state of those hoarders, shown on TV, in the chaotic decay of their homes. There is no mention of the lonely tower bloc, left standing, surreally topped by a flat-based cargo ship.

Tho living only 20 miles south of the nuclear power stations, which took a direct hit, the authors village was behind a somewhat sheltered promontory. When he prudently decamped to the hillside, with Japanese-like politeness, he did not intrude himself in front of the onlookers, from their vantage point. There was not much to see, anyway.
With regard to all the tsunami videos on the Internet, he admits to not wanting to see the human tragedies. However, he does discuss his own psychological shortcomings of disregard for the danger, not immediately seen. He relates this, to videos showing people, on high ground, warning, those below, of the coming wall of water. But they don’t start to run, till they can see it themselves, when it is usually too late.
This is a parable of the human condition. In particular, the author likens some 450 nuclear power stations, to colossal tops that have to be kept spinning, lest they crash down – meltdown.
This, of course, is bad engineering practise. You don’t build an inherently dangerous structure and then add safety constraints, as an after-thought. You build a reasonably safe structure, in the first place. You don’t take over the ultimate weapon development of uranium fission and make do with it, for civilians, as “a hell of a way to boil water.” Instead, if there is any not too offensive form of nuclear fission, it might have some limited use as a niche technology.

As one might expect, from a nearby resident, on his toes, the author has some disturbing revelations about the three nuclear meltdowns. Half a world away, they point up the arrogant infallibility, or infallible arrogance, of the British establishment in pursuit of a nuclear renaissance, that most of the public don’t want.
This is all to do with the reassertion of government, here and there, as an instrument of domination rather than representation. Humanity is more likely to flounder, in its own deceit, than anything else.

You have subscribed to alerts for Yogan Baum.

You have been added to Yogan Baum's favorite list.

You can also sign-up to receive email notifications whenever Yogan Baum releases a new book.