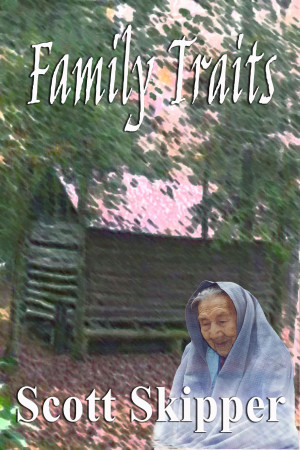 Rated 3.67/5 based on 3 reviews
How did a witness to the beheading of Charles I come to be an Indian chief in Virginia? Read how three generations of mixed blood troublemakers ran afoul of the Governor and their wives in Colonial America. More
George Skipper, 17th century Englishman, was an unlikely chief of the Nottoway Indians. Nevertheless, it was true. This mysterious character from the historical record and his descendents resided with the Indians during a time when they were hounded to the brink of extinction by the Colonial Government. They fought the French with a young colonel named George Washington. They amassed large tracts of land which they speculated for profit. They were embroiled in legal disputes and committed more than one act of dubious morality while living for several generations in a murky zone between red and white society.

FACTUAL FICTION : Family traits follows the exploits of the wildly diverse and thoroughly entertaining Skipper clan who immigrated from England under duress to become Colonists in the New World. The author tells a good story though I must confess I started to lose track of all the Georges after a certain point. It has Wild Indians, runaway slaves, tobacco plantations, spirit quests and lots and lots of rum.I thoroughly enjoyed it and am looking forward to reading the next installment of the Skipper family saga.

A Historical Novel With Teeth

Family Traits is a novel about a family of English Settlers in Amrrica who co-mingle with the American Indians and end up, through successive generations becoming more Indian than White Man. They fight for the rights of Indians, intermarrying until many of them know nothing about their English origins. Along the way, none of their family's easily recognisable traits are diluted and the extended clan are as comical and bawdy as they ancestors. There is a George Skipper in almost every generation but one, which was a deliberate exception engineered by one patriarch but even so, George is recognised in every branch of the clan.

It is nothing short of a miracle that Scott Skipper manages to hold all the threads of this family together. I know I got lost trying to remember who was whose son or grandson but not so the author whose research of the townships, historical characters and events is nothing short of excellent.

Below the surface though, we come to respect the fact that the American Indian spirit was never broken as they became reluctantly integrated with the invading hoardes. Their pride and wily survivalist mentality carries them through the worst of times and I think they will be pleased with Scott for this treatise of their predicaments.

(reviewed the day of purchase)
Ruth Ann Hixson reviewed on May 10, 2012
(no rating)
In Family Traits, author Scott Skipper writes a chronicle based on his own family history. He narrates the story of John, Francis and George Skipper along with cousin William Skipper's jour-ney to America. Using the true historical records as a base, he tells how three generations of Skippers dealt with the rawness of colonial Virginia in the 1600's.
Scott's narrative is interspersed with fiction to relate how it might have been for them. Some of that fiction is dramatic run-ins with the law and the Native American tribes in which they be-came involved to the extent of taking Indian wives.
According to Scott, the family traits written are the promiscuity and the prominent noses. As John Skipper's wife put it when introduced to cousin William: "It's easy to see you're related. It's as plain as the nose on your face."
The Skippers take up making rum to supplement their farm income which is practically non-existent. George goes to live with a Native American tribe so he can make rum and whiskey without the sheriff looking over his shoulder. He still manages to get into trouble both with the Indians and the colonial law enforcement. He takes a wife who is half white and begins a family but still can't stay out of trouble.
George Jr. and George III follow in his footsteps. Much of their trouble with the law is due to the common corruption involving the colonial government, not just in their treatment of the Skipper brothers but in their deceptive practices in dealing with the Native Americans.
A sequel of Family traits will be In The Blood that takes place in the nineteenth century. Scott has successfully taken the true historical records and tied them together with chains of dramatic fiction.
The work takes the Skipper family up to the colonial alienation to England because of the burdensome taxes imposed by England. The book is full of the adventures of the frontier as well as giving a look through the window of history. An interesting book that will keep the reader looking forward to the next page; the next chapter.

Decades of Distilling and Deceit
Family Traits is historical fiction written by a descendant of the Skipper family who landed in Virgina/Carolina in the late 1600s. The book begins with Native Americans watching a meteor streaking across the sky. A shaman and a warrior seek the meteor that arrived from the east, from across the water. As we learn, the meteor was a harbinger of trouble to come to their people from that direction. Following the foreshadowing of the meteor, we meet three brothers who have just witnessed the beheading of King Charles. These Skipper brothers decide to head to America before they experience the same fate as their father who had supported the King. After adventures at sea and in the Carribbean, where they learn to distill rum, they finally arrive in America. Fortunately they are meat by friendly Indians who share food, water, women, women, and more women. With all these women, and with the influence of their distillery, the Skipper brothers quickly run afoul of the "White Devil" English and find themselves becoming more Indian than English. Over the generations covered by the story, civilization and society spread farther and farther into the Indian country, eventually leading to inevitable conflicts, culminating in the Battle of Alamance. The book never takes itself too seriously and pokes fun at many societal norms that made no sense for the time and place. At times I was reminded of Edward Rutherford's London and at other times I was reminded of the early portions of Cooper's Leatherstocking Tales. I think many readers will thoroughly enjoy this slightly irreverent trip through the legends of Mr. Skipper's immigrant descendants.