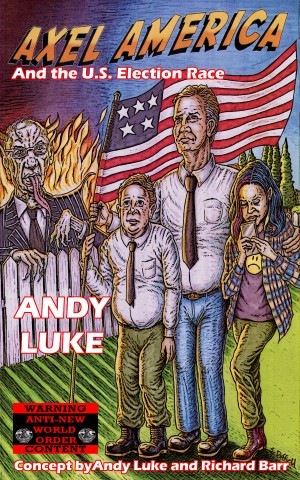 An all American Radio DJ, through his defence of America and his family, comes into conflict with the Multi Billionaire who is running for the U.S. Presidential Election. More
Is it 1776, or 1984?
No, it’s 2016 - though Axel isn’t sure.

Axel America is a patriot with questions. Torn between his family, and his one-man media crusade, the news won't be the only thing that's breaking in the America’s household as he tries to regain the love of his children and cover the 2016 Presidential race. However the satanic forces he's been warning about all his life come out from the shadows and are determined to pull him in.

Morgan Rump is a major shareholder of Faux News, a multi-billionare, and possible future President. His name is known in every city and he has the CIA on retainer. However, his corporate machinations and Presidential seat are threatened by Axel, who is on a one-man mission for TRUTH.

Axel single-handedly runs Truth Live TV, a patriotic freedom-loving website with a cult following. However when his wife, Liberty, and children, Martha and Constitution, are caught up in his war, the cycle of New World Order domination looks set to continue, just as Axel’s foe, Morgan Rump, accelerates his plans to take down the Truth-seeker once and for all.

After working through a long list of jobs Andy Luke settled as a writer in his birth-city of Belfast. He holds a B.A. (Hons) in Education, Media and Social Sciences from Oxford Brookes, and has recently contributed short prose tales to the anthologies 12 and Tense Situations.
Andy has made comic, notably: Bottomley: Brand of Britain for the double Eisner-nominated To End All Wars; Absence: a comic about epilepsy, winner of an UnLtd Millenium Award;and the critically acclaimed Gran. He's also written widely on the form as well as co-producing NVTV's The Invisible Artist documentary. To learn more visit @andrewluke at Twitter or go to http://andy-luke.com

Reviews of Axel America and the U.S. Election Race by Andy Luke

You have subscribed to alerts for Andy Luke.

You have been added to Andy Luke's favorite list.

You can also sign-up to receive email notifications whenever Andy Luke releases a new book.